Six members of contingent held back, had tested positive on arrival at Jharkhand 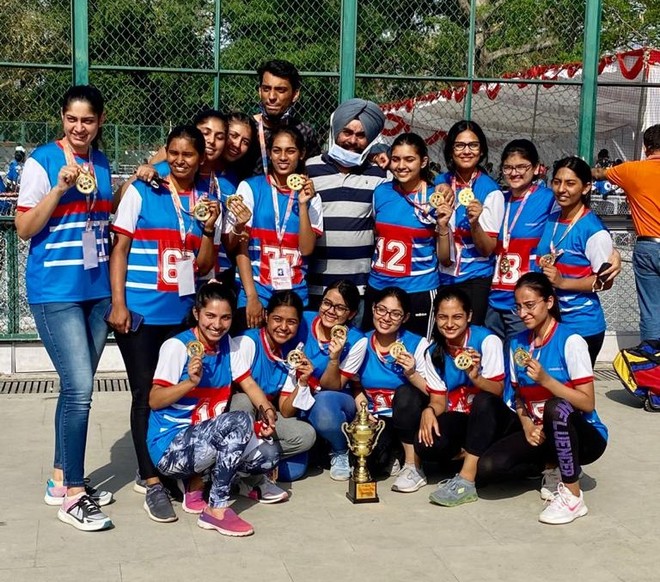 The Chandigarh team with the winners’ trophy. Tribune Photo

Fourteen of the 20-member Chandigarh women’s hockey contingent, which had last month travelled to Simdega for the 11th Hockey India Junior Women National Championship, returned home today. The remaining five players and an official are still under observation in the Jharkhand city.

Five women hockey players from Chandigarh had tested positive for Covid on arrival at Simdega.

The championship was scheduled to start on April 3, but was postponed after a number of players across teams tested positive for the virus.

A total of 13 players and one official reached Chandigarh this evening.

“The other five players, who were put under observation after testing positive for Covid on arrival at the tournament venue, along with one official, will be cleared to travel to Chandigarh within a few days. They have tested negative and will likely leave for Chandigarh within a few days,” an official said while quoting the Jharkhand authorities.

In all, 26 teams from across India were to compete in the annual event but only half the teams reported at the venue.

“The five isolated players are fine and responding well to treatment. The others were asked to leave for Chandigarh as per instructions,” the official added.

The players held back were schedule to undergo second Covid test on April 2.

As per local officials, the players had cold water during their train journey to Simdega and had sore throat.

The team had underwent Covid test before leaving for Jharkhand.

In the girls' sub-junior category, Andhra Pradesh blanked Jammu and Kashmir 5-0, while Uttar Pradesh played a goalless draw against Karnataka. Haryana drubbed Punjab 4-0 in the last match of the day.