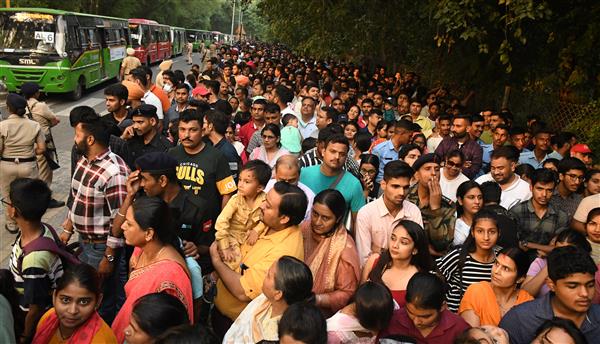 The full dress rehearsal for the air show at Sukhna Lake turned out to be a mammoth exercise for the UT Administration in terms of crowd management.

In the spectators’ zone at the lake, people complained of lack of adequate facilities, including drinking water. “Given the hot and sultry weather, the authorities could have made arrangements for water. There was a cap of one water bottle at the venue, which was not sufficient considering the duration of the event. We reached around 1 pm and waited till 5 pm to return. Even portable washrooms were installed downstairs, causing trouble for elderly people,” said Dr Manpreet Syal, a spectator.

Mohan, another spectator, said: “There was no separate entry for the specially-abled. I had to use the stairs. After the show, I had to wait for the rush to clear before I could board a bus.”

While pick-up of spectators from the 11 designated points before the start of the air show passed off smoothly, chaos was witnessed as soon as the show ended around 5 pm as people scrambled to board buses to reach the designated points where their vehicles were parked.

The spectators were asked to take specific buses for designated points, but chaos was witnessed on the road adjoining the lake just as the show ended. “Traffic could have been managed in a better way. The authorities had dedicated one route for VIP moment. As a result, rush was witnessed in the zone meant for regular traffic,” said Anmol, another spectator.

Meanwhile, CTU employees started their duty at 7 am. “We have been asked to take maximum passengers,” said a bus conductor.