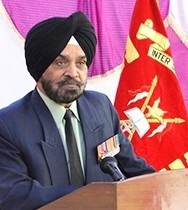 After 11 years at the helm of the Maharaja Ranjit Singh Armed Forces Preparatory Institute (AFPI), Mohali, which significantly helped stem the decline in contribution of Punjab to the officer cadre, its first director, Maj Gen BS Grewal, hung up his boots.

He handed over charge of the AFPI to Air Commodore Nitin Sathe, head of the institute’s cadets training wing today. He will hold the post till the time a new director is appointed by the state government.

Maj-Gen Grewal had been appointed AFPI Director in October 2010 after superannuating from the Army as Deputy Commandant of the National Defence Academy (NDA), Kharakvasla.

“It has been a great second innings for me. I could not have asked for a more fulfilling, challenging, educative and satisfying experience,” he said. “Today, 11 years down the line, nine batches have passed out from this institute and about 180 alumni have already joined the Defence forces as officers,” he said.