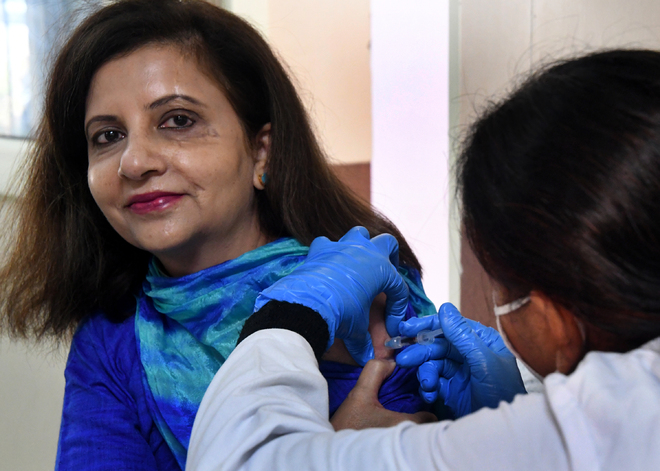 A beneficiary gets the Covid vaccine on the first day of the vaccination drive in Panchkula on Saturday.

A day after the first jab of Covishield was given to healthcare workers in the city, no major side effects or adverse events have come to the fore so far.

Dr Amandeep Kaur Kang, Director, Health Services, UT, said: “No calls were received on the emergency helpline — 1075. A few reported fever, which is a common side effect after any vaccination. However, health workers are reportedly consulting their peers rather than approaching the authorities through the helpline.” A total of 109 healthcare workers were vaccinated at the PGI.

Dr SS Pandav, who heads the Covid-19 immunisation at the institute, said some beneficiaries reported soreness at the injections site and two or three reported mild fever. “These are expected and common side effects of any vaccine,” he said.

On the first day of the Covid-19 vaccination, 374 healthcare workers were inoculated in Chandigarh. The vaccination drive went off without any major adverse event at all session sites. The next session will be conducted on Tuesday.