Residents at receiving end as funds ‘not released’ for job 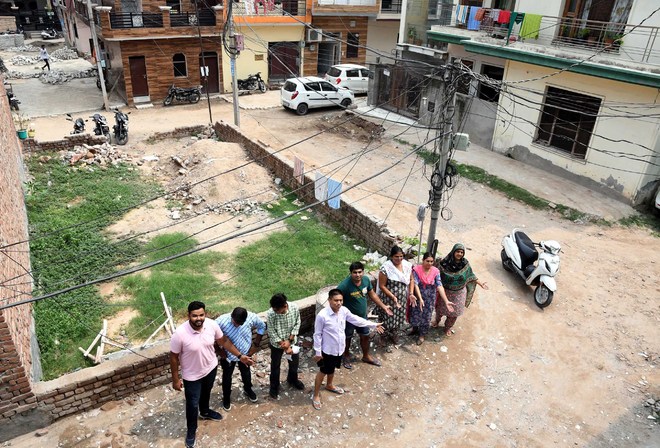 Residents of Deep Complex, Hallo Majra, say the work to lay pavers on this road is hanging fire for a long time. NITIN MITTAL

Ahead of the 2019 Lok Sabha elections, MP Kirron Kher had laid the foundation stone for laying paver blocks in Deep Complex, Hallo Majra, but even after two-and-a-half years, the work has not kicked off.

The foundation stone for “left out area of streets” at Deep Complex was laid on February 23, 2019. The work was to be carried out with funds under the Member of Parliament Local Area Development Scheme (MPLADS).

Dust flies here. There is neither any metalled road nor a concrete path. Vehicles plying in the area get damaged. During monsoon, it all becomes muddy and water stagnates here.

Earlier, on September 4, 2018, the MP had first laid the foundation stone for laying paver blocks in Deep Complex. This work was to be completed in three months, but it is still pending.

“Before the elections, people raised the issue that why pavers were not being laid in their areas. In February 2019, the authorities got a separate foundation stone laid for the “left out area,” but the work could not be started,” lamented BS Rawat, former general secretary, Deep Complex Welfare Association.

“Now, they are saying they will not be able to do the work in the left out area. But if they lay paver blocks in the front row and leave the end part, rainwater will accumulated there and create problems for us,” Rawat added.

When contacted, area councillor Bharat Kumar said, “We have got paver blocks laid in major area of Deep Complex. In the left out area, the work cannot be done as we did not get MPLADS fund. Due to Covid, funds were not released in the years 2020 and 2021. Whenever we would get funds, the work would be done.”

Rawat, who has been raising the issue with the authorities, countered, “The pandemic broke out in March 2020. Why funds were not used in 2019 then? It is just an excuse. The DC releases the funds under MPLADS and the MC carries out the work. The accountability needs to be fixed.” Meanwhile, residents said they had to bear with ‘kutcha raasta’.