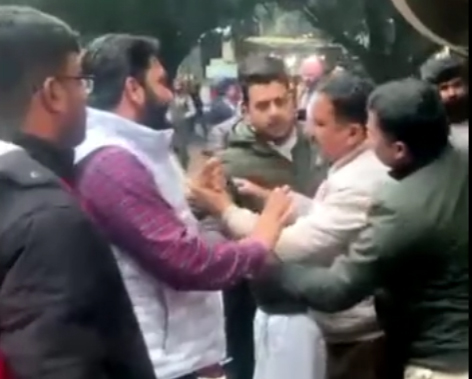 High drama was witnessed at the Student Centre in Panjab University today when the city unit of the National Students Union of India (NSUI) installed a screen to play the controversial BBC documentary on Prime Minister Narendra Modi.

No permission was sought or given for screening of any kind of film at the Student Centre — Prof Jagtar Singh, Dean Student Welfare (DSW), PU

A group of students had put up a screen and onlookers claimed the documentary was played for some time before the university administration intervened and stopped the proceedings.

“The police were informed and the equipment was handed over to them. No permission was sought or given for screening of any kind of film at the Student Centre,” said Prof Jagtar Singh, Dean Student Welfare (DSW), Panjab University.

“Attempts were made to screen the documentary without permission. I was informed by a security guard and we reached the spot. Permission from Dean Students’ Welfare is required for any kind of display at the Student Centre. We asked them but they had not received any permission for the screening,” said Vikram Singh, PU’s chief university security (CUS).

Students, however, claimed after part of the documentary was screened, the authorities stopped the NSUI members from going ahead with it.

The NSUI had put up a portable screen at the Student Centre to play the documentary. “We started the screening around 5 pm and within 30 minutes, we were stopped by the authorities. We were told by the security officials that we do not have permission to screen the documentary,” said Sachin Galav, president, NSUI unit.

The development comes a day after chaos and violence was reported from Jawaharlal Nehru University (JNU), Delhi, over the screening of the BBC documentary.