A few in city decide otherwise 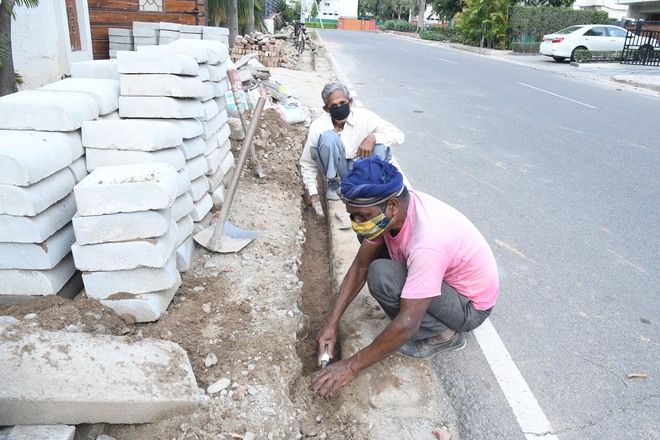 Masons from Jharkhand and Uttar Pradesh on their job in Chandigarh on Saturday. Photo: Pradeep Tewari

Apprehending imposition of complete lockdown, some migrant labourers have started leaving the city, though unlike last year, no mass exodus has been witnessed so far. Those who are working in factories or already engaged by some contractors, continue to work here.

Shashi Shankar Tiwari, president, Purvanchal Vikas Mahasangh, Tricity, shared, “Labourers do have work. However, they have started leaving for their native places fearing imposition of complete lockdown. The migrants from UP, Bihar or West Bengal, who used to pay Rs500-700 per person as train fare, are forced to pay Rs2,500-Rs3,000 for the journey in private buses.”

Hari Shankar Mishra, a city-based contractor, said, “Those hailing from UP had left earlier due to Panchayat polls there. Those from Bihar started leaving from April 15. Those working in factories are working, but daily wagers, out of fear of lockdown, have started leaving for their native places in private buses.”

Rizvi, a labourer from Faizabad, who was working at a construction site in Sector 16, told Chandigarh Tribune, “I am working under a contractor so I need not leave as I have work in hand.”

Labourers Budhman from Jharkhand and Jai Ram from Gorakhpur, who were working near Sector 25, added, “At present, we have work; so, it’s all ok. If there will be no work in future, then we will think what is to done.”