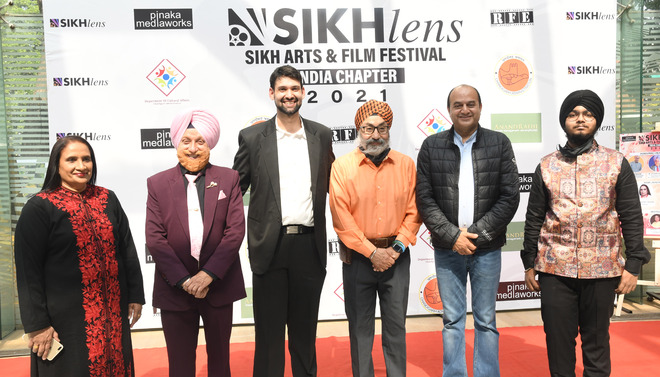 While 24 films that brought forward tenets of Sikhism being observed in different parts of the world were the highlight, a photo exhibition, Charan Chhoh Punjab, by Vinod Chauhan that traced journey of Guru Nanak Dev in 120 frames engaged the visitors.

The festival saw three world premieres for films, “Art Finds Its Way”, “Kites: Beyond Boundaries”, “Silver Lining: The Journey of Rashpal Singh”, directed by Ojaswwee Sharma, India Head Sikhlens, met rousing response. “Kite flying is the best natural therapy,” said elated Devinder Pal Singh, of “Kites: Beyond Boundaries”. Spectators were glued to Aman Singh Gulati, aka Almond Singh’s, works, recipient of many world records making the largest and the smallest art works culled from life. Sikh gurus and Pulwama martyrs, Aman picks up themes from life. “It’s so amazing to have our film seen and loved by so many people, I am happy that I could make my parents proud,” he shared. Human rights activist Dhananjay Chauhan took to stage to perform amongst others.

Dr Param Preet Ghuman released her debut book of poetry, “Safar”. The collection has 47 poems that touch different aspects of life. “Safar is a metaphor for life, the poem with the same title a reflection on how life unfolds.” In the medicine profession for the past three decades, Dr Ghuman believes that more and more women must engage in self-expression that’s generally denied to them.

Varied themes, “Knitted Beliefs”, story of Narayanpura, a neighbourhood in Karachi where Hindus, Muslims, Christians and Sikhs live together in harmony, to “The Sardar of Conde-Sur-Vire”, first elected Sikh in France, and “The Cheez that Binds Us”, about Punjabi Sikhs in Northern Italy, different stories from across the world entertained the audience. — TNS