Two carjacking gangs on the prowl in Mohali : The Tribune India 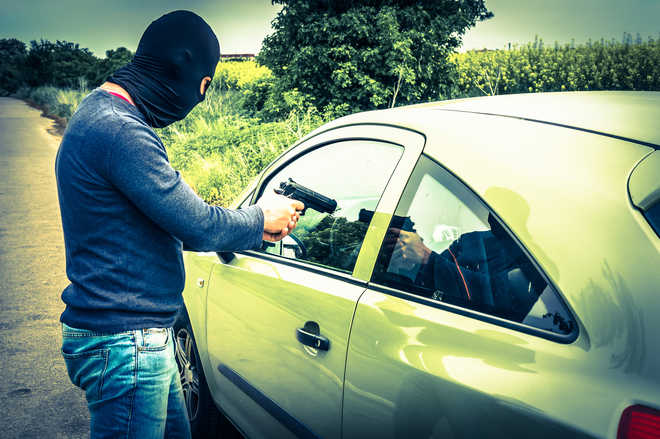 Two gangs of car snatchers have been on the prowl at night on Mohali roads for the past fortnight, claim the police. The police have got vital clues from the CCTV footage of the areas where a series of car snatching incidents have been reported in the past 10 days or so.

The police have got vital leads into the cases and are close to nabbing the suspects. DSP City-2 Harsimran Singh Bal says: “Teams have been formed and police are working on arresting the suspects.”

Driving on Mohali roads at night is turning out to be unsafe as miscreants have committed four carjacking incidents within a fortnight.

Four unidentified car-borne youths had taken away a car at gunpoint from a Panipat driver in the Phase 11 market on November 23. Complainant Vinod claimed he had come from Panipat to drop passengers at Phase 10.

After dropping them off, he stopped at an eatery in Phase 11 for dinner. As he was about to leave, four masked men arrived in a luxury car and pointed a pistol at him. They took away his phone and purse, before fleeing in the taxi. The victim used the phone of a passer-by to inform the police.

This came hours after four unidentified youths in a luxury car snatched a car in Sector 88. The victim, Harshad, said the carjackers also fired gunshots into the air.

The police said the car was later found abandoned by the roadside in Sirhind. It is suspected the carjackers might have discovered the vehicle was GPS-enabled and had an anti-theft system. Harshad said the four men came in a Honda City car and allegedly started pulling him out of his vehicle.

During the investigation, the police have concluded the Fatehgarh Sahib gang was behind both these incidents.

Another snatching incident was reported on November 20, wherein four men had taken away a car at gunpoint in Kharar and abandoned its driver in Nakodar. It was the handiwork of the Ferozepur-based gang, claim police.

The Kharar police have registered a case and are working on it, say cops. Another Ambala gang was busted in Sarsini on November 16 after its four members were arrested for robbing a Ludhiana-based jeweller of Rs 8 lakh in cash, 31.5-gm gold jewellery and a car.