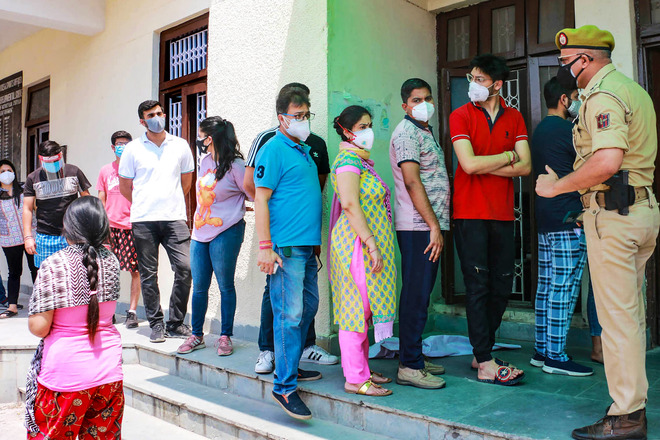 People wait for their turn to receive a dose of Covid vaccine in Jammu on Sunday. PTI

Out of the fresh cases, 1,150 were from the Jammu division and 2,421 from the Kashmir division of the Union Territory, officials said. Srinagar district recorded the highest of 1,126 cases, followed by 486 in Jammu district and 268 in Baramulla district. The active cases have reached 32,421 while 1,48,695 patients have recovered from the disease so far.

Ladakh’s Covid tally has climbed to 14,086 with 117 fresh cases, while the death toll mounted to 144 as one more patient succumbed to the disease.

The active cases in the Union Territory, however, dropped to 1,400 as 166 more patients were recovered, officials said quoting a bulletin issued by the Directorate of Health Services.

Of the new cases, 99 were reported from Leh and 18 from Kargil. The latest death was reported from Leh, taking the district’s toll to 100. So far, Kargil has reported 44 deaths. Of the 1,400 active cases, 1,271 patients are undergoing treatment in Leh and 129 in Kargil. — PTI