The wedding functions will begin from Tuesday in a fort, which has been converted into a luxury hotel in Sawai Madhopur 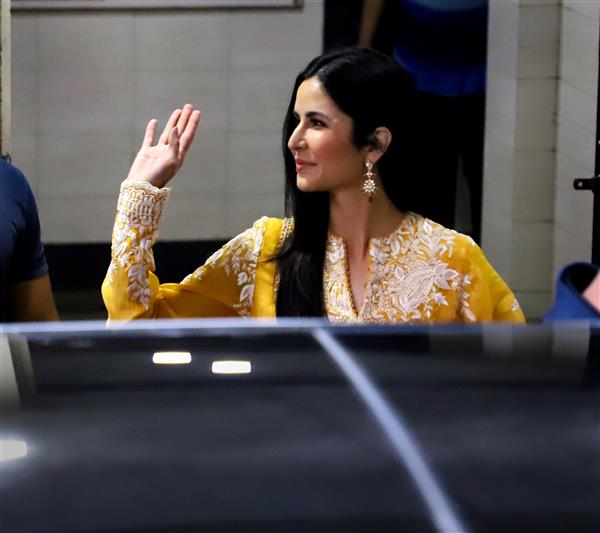 Bollywood actress Katrina Kaif leaves for her wedding, in Mumbai, on Monday. PTI

Bollywood actors Katrina Kaif and Vicky Kaushal arrived here on Monday night for their wedding to be solemnised at a hotel in Rajasthan’s Sawai Madhopur district.

Both of them and eight others arrived at the Jaipur airport in a chartered flight. Earlier in the day, some of the family members including one sister of Kaif and other guests arrived in different scheduled flights.

They left for the wedding destination by road, Jaipur airport sources said.

The wedding functions will begin from Tuesday in a fort, which has been converted into a luxury hotel in Sawai Madhopur.

Elaborate security arrangements have been made in and around the hotel. The wedding functions will be held from December 7 to 10, Sawai Madhopur district administration officials said.

The wedding will reportedly be held at Six Senses Fort Barwara in Chauth Ka Barwara town of Sawai Madhopur.

Reports of Kaif, 38, and Kaushal, 33, dating have been doing the rounds for over a year, but the two actors never went public with their relationship.

Sawai Madhopur District Collector Rajendra Kishan had said on Friday that a meeting of the district administration officials was organised to discuss the law-and-order arrangements for four days during the celebrity wedding.

Keeping in view the coronavirus pandemic situation, Kishan also said directions have been given that all guests should have got both the doses of vaccination.

“As far as we have been informed, there will be 120 guests for four days from December 7 to 10. RT PCR test is compulsory for those who have not taken vaccine doses,” he had said. —PTI