Jimmy Fallon mocks Pak PM Shehbaz Sharif over his struggle with headphones during meeting with Putin : The Tribune India 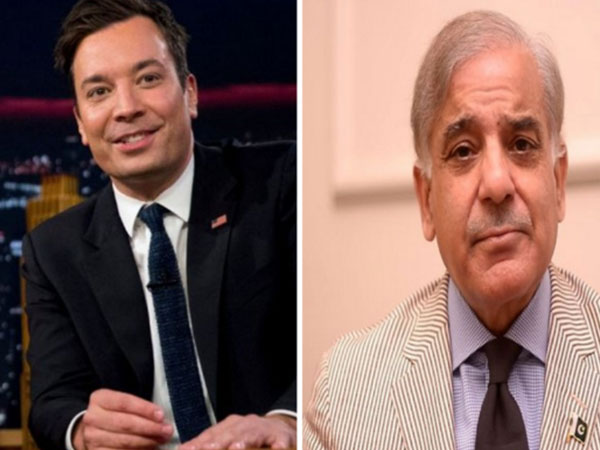 Pakistan Prime Minister Shehbaz Sharif got featured on Jimmy Fallon's talk show — all thanks to his awkward moment during a bilateral meeting with Russian President Vladimir Putin, on the sidelines of the Shanghai Cooperation Organisation (SCO) Summit in Uzbekistan recently.

On Thursday, a video went viral in which Sharif and Putin are seen sitting beside each other. As the discussion is about to begin, Sharif is seen fixing his earphones but failing. He seeks help and gets it fixed. However, the Pakistan PM's struggle did not end there as the earphone fell off once again from Sharif's ear after the meeting started.

This CrimeMinister is a constant embarrassment for Pakistan. Even President Putin had to eventually just laugh at this clumsy man. Pathetic. This is what conspirators wanted? To have by design a politician who would not only be a crook but also a pathetic apology for a PM? pic.twitter.com/mmEhLY7RZg

Sharif's struggle with earphones triggered an inevitable laugh from Putin.

Also, netizens including Fallon did not leave any chance to make fun of the Pakistan Prime Minister.

An excerpt from the latest episode of Fallon's show has been doing the rounds on the internet in which he is seen mocking Sharif.

"That guy is the leader of 220 Million people," Fallon quipped after showing Sharif's viral video to his audience during the episode.

However, Fallon's jibe at Sharif over his awkward moment at SCO meeting did not go down well with a section of social media users.

"Hey@jimmyfallon- have u talked abt the devastating floods destroying Pakistan? "A nation of 220 million people" is destroyed by climate change because of YOUR country's greed & wastefulness. If u haven't donated or raised funds for us u don't get to use us as a joke," a netizen tweeted.

"Deeply offensive that@jimmyfallonchose to mock 220 million people of Pakistan for a leader allegedly put in place after US-instigated regime change, while completely ignoring the suffering caused by devastating floods & climate change. Tone-deaf much?" another user wrote.

Samarkand hosted the 22nd Summit of the Shanghai Cooperation Organization for its member states and Council of Heads which ended on Friday. Due to the Covid-19 pandemic, the SCO Summit was cancelled in the last two years.