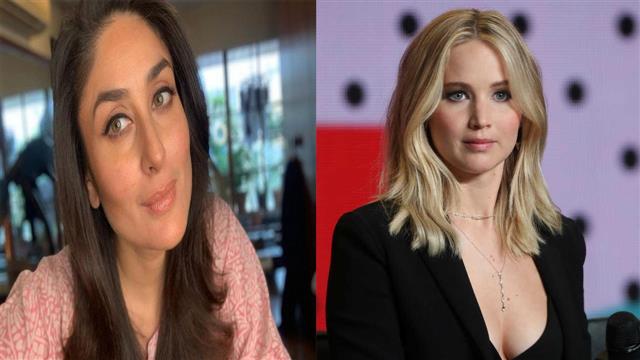 Kareena Kapoor these days is obsessed with Hollywood star Jennifer Lawrence. Kareena is one actress who, during her pregnancy, aced maternity fashion like no one else, and now when Jennifer is pregnant, her new maternity look has impressed this mother of two and how.

The Bollywood style icon has been sharing pictures of pregnant Hollywood star Jennifer Lawrence. In the latest one, Jennifer wore a black and white polka dot midi dress to promote her upcoming film with Leonardo DiCaprio, ‘Don’t Look Up’, on The Late Show with Stephen Colbert.

In her story, Kareena shared a picture of Jennifer Lawrence heading for ‘The Late Show with Stephen Colbert’ in New York City. The picture has a sticker that says ‘Obsessed’.

Looking gorgeous in a polka-dot-print dress by Oscar de la Renta, Jennifer accessorised her ensemble with pearl drop earrings and a pearl necklace. The dress has a square neckline, puffed shoulders and long sleeves.

The Hollywood actress wore her hair in loose curls open in a side parting, in make-up it was the glamorous winged eyeliner, blush, mascara and glossy lips. Jennifer teamed her attire with black high heels to complete the look.

Her pictures where she is seen flaunting her growing baby bump and pregnancy glow are all over the social media.

Some days back, Jennifer Lawrence attended the premiere of ‘Don’t Look Up’ in a gold dress by Dior that she wore with a floor-length cape. She teamed her radiant ensemble with matching jewellery from Tiffany & Co.

Kareena also loved Jennifer’s look in the Dior dress and she had showered compliments about it in her Instagram stories.

Kareena took to her Instagram and uploaded a picture in her story where Jennifer can be seen posing with her co-star Leonardo DiCaprio. Kareena wrote "Simply gorgeous" for Jennifer.

Jennifer is expecting her first child with husband Cooke Maroney. She will be soon sharing the screen with Rob Morgan, Jonah Hill, Mark Rylance, Tyler Perry, Ron Perlman, Timothee Chalamet, Ariana Grande, Scott Mescudi, Cate Blanchett, and Meryl Streep in the satirical science fiction black comedy. The actress will be playing an astronomer in the film along with Leo as the two attempt to warn mankind of an impending doom.

Meanwhile, Kareena will be seen with Aamir Khan in ‘Laal Singh Chaddha’, an adaptation of a successful comedy drama ‘Forrest Gump’.