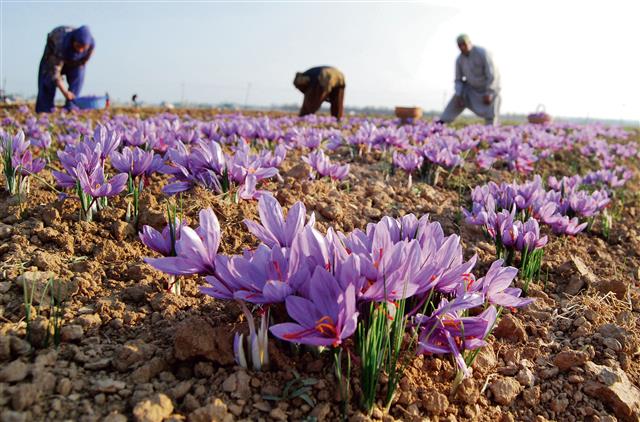 (The mildly intoxicating whiff of saffron is in the air. It seems a window in the beloved’s house has opened).

These lines, read some time back, seem particularly apt at the moment. Kesar from Kashmir has, at long last, been granted the geographical indicator (GI), and one hopes that this will encourage our compatriots to take pride in this unique product of a province that has been called Paradise on Earth. Let the world share the sublime aroma, flavour, enchanting hue and rejoice.

Hopefully, this recognition will encourage consumers to take some trouble to distinguish between real and fake saffron. Many suffer from the misconception that Spanish saffron is the ‘best in the world’, and our own produce is inferior to it. This canard has originated because of large-scale adulteration in saffron from Kashmir. The GI tag should go a long way towards restoration of this exotic ingredient to its rightful place of pride. Kesar, saffron or zafran, call it by any name, is the most expensive spice by weight in the world. Almost 45,000 flowers contribute their aromatic and flavourful stamens to make up this measure. The most premium quality commands a price of up to Rs5,00,000 per kg! 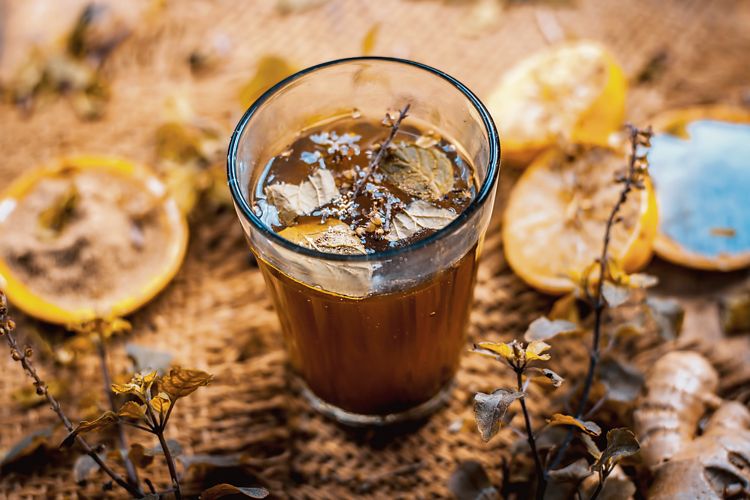 The indiscriminate use of saffron, however, has bred familiarity that makes us underestimate its virtues. We encounter the ingredient in ras malai, jalebi, and even kesariya paneer tikka. Few can distinguish between real saffron (good quality) and adulterated stuff. Many think that saffron is overrated because what they have been exposed to is substandard produce.

Romantic images are far removed from the back-breaking task of saffron farming. It is restricted to a small number of families, who dwell in the adjacent villages. Joint family system survives somehow against all odds and political turbulence to sustain the trade. The harvest season is very short. The flowers grow very close to the ground and have to be picked squatting or in kneeling position. The saffron strands, known as zarda and lachcha, have to be then separated manually from the flower. 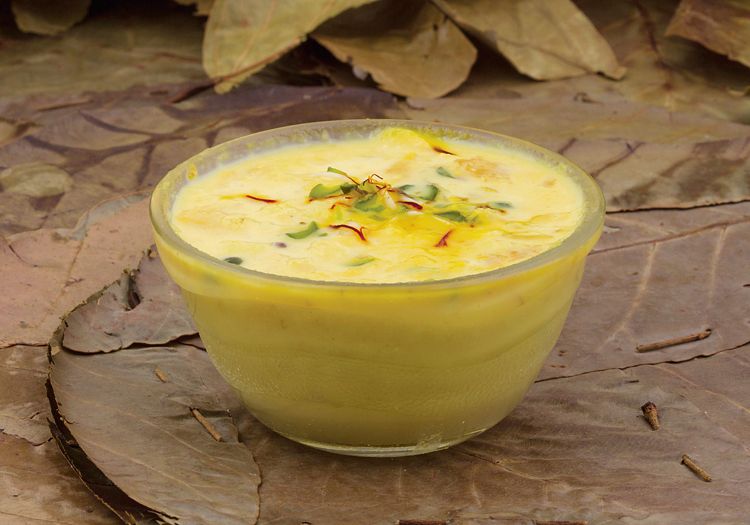 When a short documentary shoot took me to Pampore, near Srinagar, a couple of years back, I was amazed to see how specialised intricate tasks like sorting, grading, drying and packing are done in confined spaces with all family members chipping in cheerfully. During another such trip in Kishtwar, we encountered the local saffron. The host generously gifted us a small casket of the best quality — we are not being ungrateful, but it was no match to its Pampore cousin.

Not far from Srinagar lies the township of Pampore — the name derived from original Sanskrit Padmapura — City of Lotuses. Emperor Jehangir chronicled in his diary how overpowering was the fragrance of the violet-petalled blossoms in autumn when the ‘crop’ covered like a carpet hundreds of acres of flatlands. The lover of good life also thought that the height of ecstasy could be experienced on a full moon night in Pampore in autumn, when countless blossoms bloomed stretching as far as one could see. Legend has it that zafran was brought to the Valley some time in circa 5th century after the birth of Christ by two itinerant Sufi saints from Persia. As the folklore has it, the saints had been both cured of a painful chronic ailment by a local physician, who was gifted by the grateful patients with a bulb of the rare flower with miraculous properties. The transmission from Iran is quite plausible as Kashmir is referred to in some early texts as Iran Sagir (smaller Iran). Its cuisine and crafts, language and manners carry a deep Persian imprint.

Kashmiri Pandit tradition, however, narrates another story. Great physician Vagbhatt is once said to have cured a serpent demigod disguised in the human form of a painful eye disease. It is from this celestial patient that he received this precious gift. It appears that practitioners of ayurveda in India were familiar with this ingredient and its medicinal properties as it is described in some detail in Bhavaprakasa Nighantu — traditional Indian materia medica dating back to the 4th century.

Time-tested properties of saffron are believed to be restorative, rejuvenating and by implication aphrodisiac. It is an essential ingredient in ayurvedic preparations like chyawanprash. The royals in Rajasthan commissioned their distilleries to produce liquor for special occasions. The master craftspersons came up with kesar-kasturi — a potent blend of saffron and musk. Saffron is believed to have a warm property — garam taseer, and it is essentially a winter spice. The writer of these lines recalls mother fortifying us in freezing winter to build immunity against cough and cold with milk laced with kesar, cardamom and almonds. When kesar was not at hand, a pinch of turmeric, aka poor man’s saffron, replaced it.

Saffron is used to enrich and garnish both vegetarian and non-vegetarian recipes in the subcontinent. It is impossible to imagine a biryani that is cooked without it. A few strands are often carefully sprinkled to make the diner believe that he is being treated with exotic ingredients. Kesari, the rawa halwa, was obviously named after the ingredient that lent it colour and taste. More often than not, this confection is nowadays artificially coloured and only a few strands of saffron may be used as garnish.

Masala chai may have just a hint of its essence but the kahwa in Kashmir that is poured in a light golden stream from a samovar relies on it to create magic on the cold winter mornings. Kesar adorns the rich bread sheer maal that is prized in Lucknow and Hyderabad. It enriches the thickened milk garnished with almond flakes. Frozen desserts like kulfi and desserts like kheer and phirni seem incomplete without kesariya garnish.

In Benaras, we were once treated to a delectable kesar bati, a confection conjured out of saffron-laced clotted cream.

The ubiquitous bundi ka laddoo becomes extraordinary motichoor by incorporating a few strands of the aromatic substance. Lassi and thandai, in their saffron-laced version, rank a notch higher than the plain stuff. In Bengal, saffron adds a touch of subtle elegance to prawns cooked in coconut cream and a zafrani fish curry that seems to have been influenced by Mughal culinary practices. In Maharashtra, kesar is an essential ingredient along with green cardamom seeds in the delectable shrikhand.

It is not only in the realm of cuisine that saffron is valued. It is considered to epitomise excellence and elegance in diverse fields. It is the colour symbolising valour, sacrifice as well as renunciation and selfless service. Kesariya banna, the chivalrous young warrior dressed in saffron-coloured attire, is extolled in Rajasthani folk songs that resonate in the vast desert far removed from the Vale. One of Mira Bai’s celebrated bhajans uses the metaphor of saffron to praise virtues like love and compassion. Kesar, called kumkum in Sanskrit, is traditionally used at almost all ritual worship. The auspicious tikka put on the forehead was to be prepared with saffron mixed with a substance to bring out the bright colour. Like chandan (sandal), kesar, too, was an indispensable part of the shringar — formal makeup.

Perfumers have used it for generations in seductive perfumes. Tobacconists in Kannauj, the city famous for Indian ittar (perfume), have used it for generations to create intriguing perfumes. Ittada Khan, Muttada Khan, in days gone by, used strands of zafran to aromatise its mushki dana ilayachi dana tobacco pellets draped in silver leaves. Sugandhis like Dharm Pal Prem Chand and Satya Pal continue with the practice in their more expensive products Baba or Tulsi chaap. Kesar is rendered more potent blended with silver leaf and other aromatic substances. Lest you start accusing us of promoting a narcotic, let us hasten to add the silver leaf-draped saffron-flavoured green cardamom seeds are also available!

Guerlin in France has named one of its upmarket perfumes as Shalimar, doffing its proverbial hat to saffron from Kashmir. While saffron is absent in East Asian and South East Asian cuisines, it is used in delicacies in the Middle East and Europe. In Italy, risotto is subtly flavoured with saffron and in Spain, it makes paella and many other sea food delicacies more tempting. The strands of saffron make every dish a joyous festive fare.