Slice of history from Tarn Taran 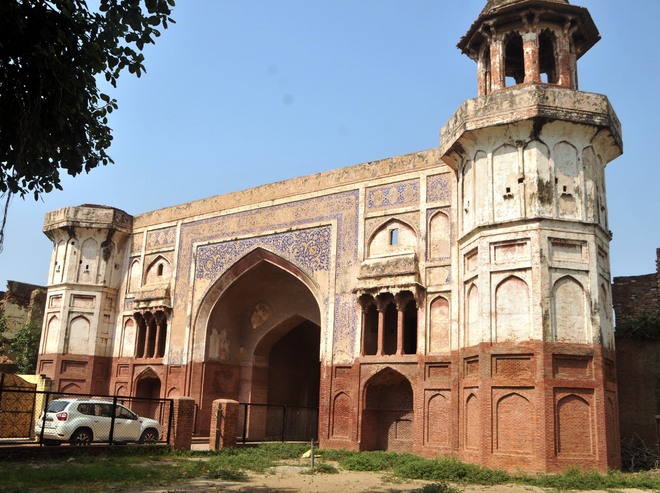 Delhi DarwaZa (Serai Amanat Khan): The two-storeyed arched gateway facing east has been recently reconstructed by the Archaeological Survey of India. The specimens of calligraphy designed by Amanat Khan can be seen on the front side.

Tracing the footprints of travellers, Tribune correspondent Manmeet Singh Gill & lensman Vishal Kumar travelled on the Sadak-e-Azam, originally built by Sher Shah Suri and later rechristened as Badshahi Sadak by the Mughals. The remnants of the past, though in a shambles, can still be seen alongside the stretch from Serai Amanat Khan to Serai Noordin.

Spiritual journey of Gurdwaras in Amritsar

During Sher Shah Suri’s brief stint at power after defeating Humayun in 1540, the Mughals strengthened the road, which was finally completed during Akbar’s reign. The remnants of the Kos Minars and serais still exist on the stretch, which is presently known as Attari-Tarn Taran Road.

The serais (rest houses) were built during the Mughal period on a distance of roughly 18-20 kilometres and served the purpose of night shelters for traders and officials of the darbar. A Kos Minar (mile stone) was built at roughly 1.8 kilometres each and helped travellers as markers of distance.

These minars were also central to the efficient post-delivery system developed by Sher Shah as each one had a rider ready with a horse for relay of horses to deliver post. While most of these Kos Minars have withered, a few have survived the onslaught of time.

Of the two serais, Serai Amanat Khan has been under renovation by the Archaeological Survey of India for decades now. Of the Serai Noordin, only a dilapildated gateway and a tomb are remaining.