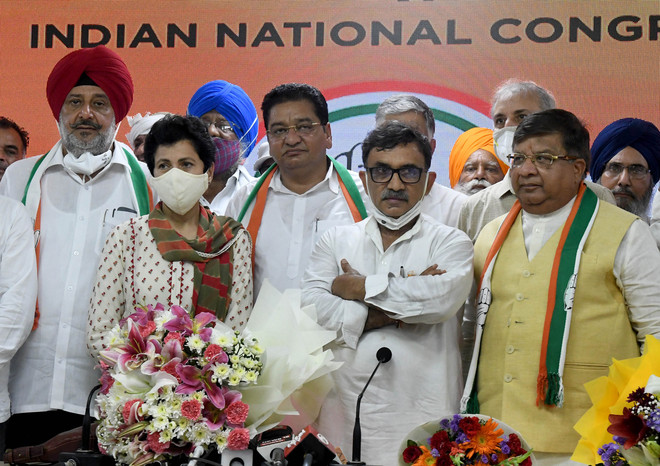 BJP failure on all fronts

There are leaders who understand that the Congress is the only viable alternative to the BJP, which has proved a failure in all spheres of governance... Entry of senior leaders to the Congress reflected the party’s growing base in the state. — Kumari Selja, HPCC Chief

Introducing the trio, Selja said they had pledged to work for the propagation of the Congress ideology and had decided to join the party unconditionally.

There are leaders who understand that the Congress is the only viable alternative to the BJP, which has proved a failure in all spheres of governance, be it on farm laws, jobs, prices of essential commodities or students’ future. After the JEE Main paper leak, there are reports that NEET-UG question paper held yesterday was also leaked,” Selja said, adding that the entry of senior leaders to the party reflected the growing base of the Congress among people in Haryana.

Beniwal, formerly with the INLD, had joined the BJP ahead of the 2014 state elections and contested unsuccessfully against the INLD’s Abhay Chautala in Ellenabad in the 2019 state poll.

The seat is vacant, with bypolls due after Chautala resigned from the state assembly in January this year in solidarity with the farmers protesting agriculture reform laws.

Beniwal is likely to contest the seat on the Congress ticket in the impending bypoll. Beniwal had quit the BJP in April, protesting against the farm laws.

Goel is an industrialist who, Selja said, “was not obliged to come on board but decided to join to serve the people under the leadership of Sonia and Rahul Gandhi”.

Goel termed his return to the Congress as homecoming. Kanwalji Singh is the son of former Congress MP Tara Singh, who was in the 10th Lok Sabha with Kumari Selja. Selja said Singh hails from the epicentre of farm protests in Haryana — Karnal.

Welcoming the leaders Bansal attacked the BJP government and said it has lost the trust of the people due to mismanagement across board.