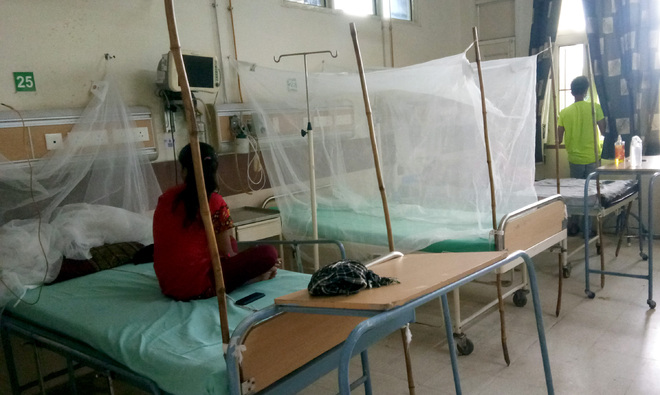 With the total dengue cases mounting to 917 in Hisar district, officials the Health Department and the Municipal Corporation are busy indulging in blame game for the lack of measures regarding the outbreak.

In a meeting of the Health Department chaired by the Civil Surgeon last week, the officials said they had written letters to the MC about the stagnant water in vacant plots and open spaces in the town after the untimely rains. Even the fogging carried out by the MC officials seemed to be merely an eyewash.

Meanwhile, Dr Subhash Khatreja, District Malaria Officer, informed the meeting that the stagnant water had resulted in the outbreak of vector-borne diseases in the town. Civil Surgeon Dr Ratna Bharti too had stated that the Health Department had carried out several activities such as house-to-house inspection for the cleaning of water coolers and tanks etc.

The MC in its meeting, however, moved and adopted a censure motion on the statement of the Health Department and said apparently it was caught off guard in its preparations to tackle the outbreak of vector-borne diseases after monsoon, which had resulted in the increasing number of dengue cases. The MC said they should complain about the about the laxity of health officials to the higher authorities and demanded action against them.

According to the official health bulletin, eight more dengue cases were reported on Monday, taking the tally to 917. Dr Khatreja said 812 patients had recovered from the disease while 102 were still recuperating. The district has reported one death due to dengue.