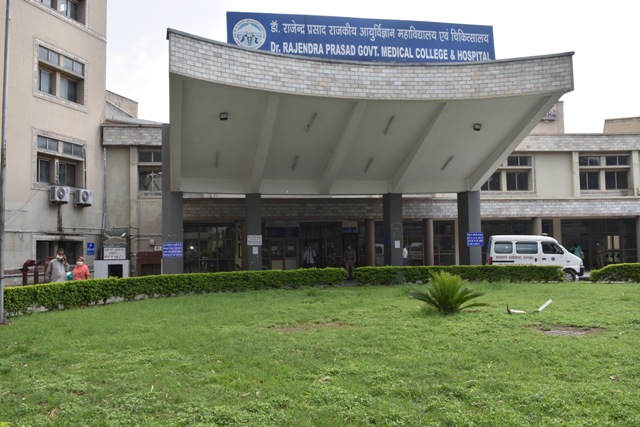 As many as 18 fresh COVID-19 cases were reported in Himachal Pradesh on Thursday, taking the state tally to 378, officials said.

Meanwhile, 17 people -- 9 from Kangra, 6 from Shimla and 1 each from Bilaspur and Una also—were also cured of the virus, Special Health Secretary Nipun Jindal said.

Four of the fresh cases were reported in Kangra, followed by three in Mandi, two from Chamba, one each from Bilaspur and Kullu and seven from Sirmaur, he added.

The number of coronavirus cases in the state has risen to 378, Additional Chief Secretary (Health) R D Dhiman said, adding that the number of active patients is 197.

As many as 167 patients have recovered so far, he added.

So far, six people have succumbed to the virus in Himachal Pradesh.

Four more people have tested positive in Kangra taking total number of corona cases in the district to 98.

From Sirmaur, as many as seven new COVID-19 positive cases, including a pregnant lady, were detected in Sirmaur district on Thursday, taking the district tally to 11.

The positive patients include six people who had arrived at Kala Amb on May 28 and were under institutional quarantine, four who had come from Saharanpur (Uttar Pradesh), two from Shalimar (Delhi). Patients are aged from 20 to 48 years.

Besides this, a pregnant lady, who was admitted at the Nahan-based Dr YS Parmar Medical College and Hospital, was also tested positive on Thursday.

The Chief Medical Officer is yet to take a decision on where to send her.

The other six were shifted to the COVID Care Centre at Trilokpur, Sirmaur SP Ajay Krishan Sharma informed.

The lady is a resident of the Burma Papri area and the health staff and the police have begun contact-tracing. People residing in the Kala Amb-based quarantine centre were also being identified for sampling, informed Sirmaur DC Dr RK Pruthi.

There is only one active case in the district while three have been cured.

Two cases were detected on May 14 — a 30-year old mother and her seven-year-old daughter — who had returned from Delhi.

Though the mother had tested negative in her latest test, the daughter is yet to be cured.

Prior to that, two Tablighi Jamaat members had tested positive for COVID-19 in April and have been cured.

Meanwhile, four in Kangra and two in Chamba tested positive for the virus on Thursday.

Earlier in Kangra, the Tibetan tested positive for COVID-19 had died at Tanda Medical College.

The Tibetan is a 47-year-old male resident of Dalhouise. He had returned from Delhi and was in institutional quarantine.

The other person who tested positive in Kangra is an 18-year-old male resident of Guned in Churah tehsil. He was also in institutional quarantine at Banikhet and had returned from Sonepat (Haryana).

Both patients were shifted to institutional quarantine in Baloo.

Four more have tested positive in Kangra taking total numbers of cases in the district to 98.

Those, who tested positive on Thursday, include a 30-year-old male resident of Talson village and is currently at institutional quarantine in Baijnath. He arrived in Kangra from Delhi in his own vehicle on May 28.

Besides, a 17-year-old male resident of Sagoor village, Baijnath, is under home quarantine. He arrived from Delhi by taxi on May 28.

A 35-year-male resident of Baijnath is currently at institutional quarantine in Parour. He arrived from the US and then from Delhi to Dharamshala by Spice jet flight on May 29.

Among the four is also a 46-year-old female resident of Mandhol village, Baijnath, and is currently under home quarantine. She arrived from Delhi on May 28 by taxi.

Meanwhile, six patients were cured and discharged from institutional quarantine facilities on Thursday.

All four, who tested positive in Kangra, were transferred to the COVID containment centre in Baijnath.