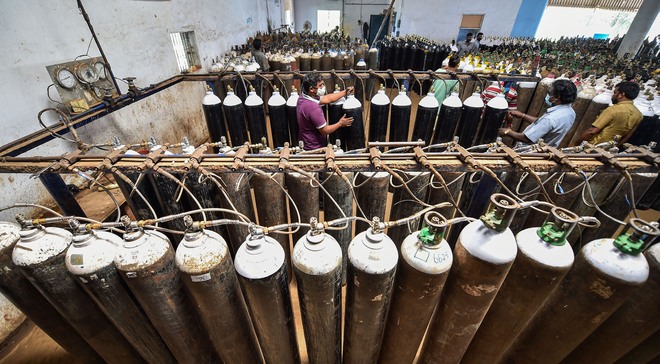 There is a dire need for 100 oxygen cylinders each at MM Medical College and ESIC Hospital, Katha. file photo

The health authorities are facing a major challenge in effective contact tracing with the limited staff and increasing oxygen requirement as 28 per cent to 35 per cent of the samples test positive in Solan district daily and death rate is 0.8 per cent.

The fact that the positivity rate is about 8.5 per cent while the rate of recovery has plunged to 85 per cent, bottlenecks like the unavailability of oxygen beds and ambulance, untimely referrals and budgetary constrains are the key issues of concern, said health officials.

On an average, 24 patients require oxygen on a daily basis. As against three patients, who were on oxygen support on April 1, the number reached 60 till April 30. There is a dire need for 100 D-type oxygen cylinders each at MM Medical College and Hospital as well as the ESIC Hospital, Katha, while the makeshift hospital at Nalagarh and the Regional Hospital require 50 more cylinders, according to a meeting held with Health Minister Rajiv Saizal here today.

The rest of the district requires 250 cylinders. There are 40 oxygen concentrators and 570 cylinders in various hospitals.

The daily consumption of D-type oxygen cylinders had increased from 2 on April 1 to 232 on April 30. As many as 280 cylinders were consumed yesterday.

Deputy Commissioner KC Chaman said SDMs had adequate funds for securing refilled oxygen cylinders. The issue of providing more staff to ensure effective contact tracing would be taken up with the government.

As many as 146 Covid patients are admitted to various hospitals while 2,478 are in home isolation.

Saizal attributed the rising deaths to co-morbidities like diabetes, hypertension, kidney ailments, etc. He said efforts were afoot to ramp up health infrastructure.

About 88 oxygen beds of the 130 at MM college, ESIC, Katha, and two other centres at Nalagarh are occupied while all 12 ventilator beds at MM hospital are in use. The Health Department has proposed to provide 10 ICU beds in the makeshift hospital at Nalagarh to cater to the rising number of critical patients.