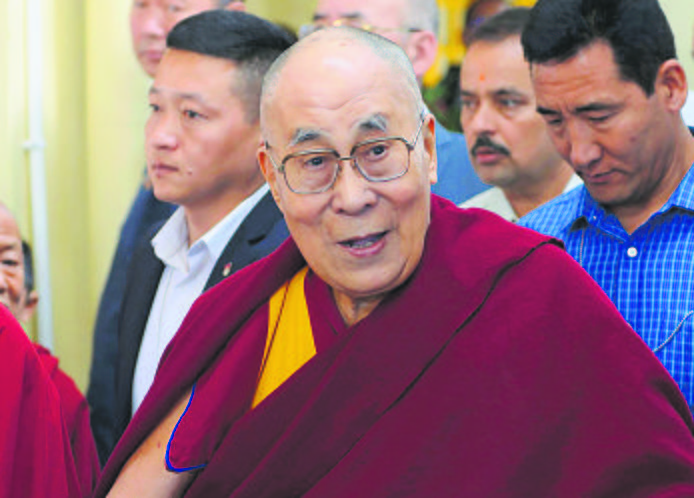 The middle way approach proposed by the Dalai Lama is the only viable solution to the Tibet problem, said president of Tibetan government in-exile Penpa Tsering here. - File photo

The middle way approach proposed by the Dalai Lama is the only viable solution to the Tibet problem, said president of Tibetan government in-exile Penpa Tsering here.

“Having considered the varying degree of repressions in Tibet, which is always followed by a series of claims and counterclaims made by the Chinese counterpart and us, the only way forward now is to have the Chinese government come on board to accept the middle way approach proposed by the Dalai Lama and approved by Tibetan people as the only viable solution for a long-lasting resolution of the Chinese-Tibetan conflict,” said Sikyong Penpa Tsering.

The CTA held a press conference to issue its official response to China’s White Paper titled “Tibet Since 1951: Liberation, Development and Prosperity” published in May 2021. Penpa Tsering said that today also coincides with the 72nd founding anniversary of the Chinese Communist Party and through issuing the counter-response titled 70 Years of Occupation and Oppression, the CTA vehemently declares that there was nothing to celebrate about the day.

In his address, Penpa Tsering said the 96-page official response released by the CTA comprehensively highlights the factual chronological events countering China’s narrative on Tibet regarding the historical status of Tibet while also opposing China’s legitimising the occupation of Tibet.

“It is absolutely not 70 years of liberation, but in fact, 70 years of suppression and oppression”, said Penpa Tsering.

He added that the so-called Peaceful Liberation of Tibet claimed by China was just a disguise to cloak the truth and misinform both Chinese people and the global community to advance the Chinese Communist Party’s ideology.

The official response of the CTA details the facts of the landmark 17 points agreement and its successive violations by the Chinese counterpart.

“The education policy implemented by China in the past 70 years is only aimed at the destruction of Tibetan language and hence, Tibetan identity,” he said.