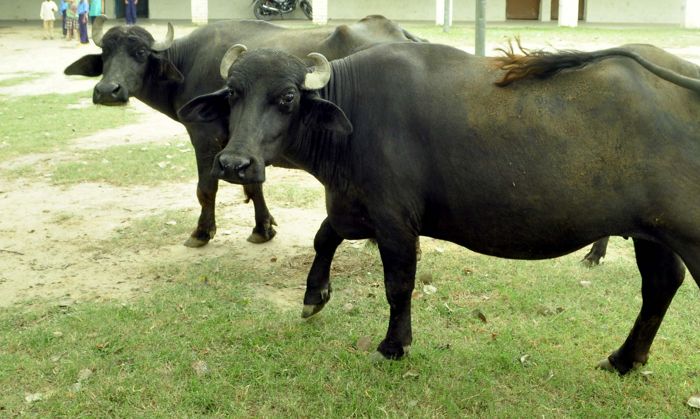 Residents of Patta village adjoining the Pong Reservoir in Fatehpur subdivision of Kangra district are living in panic for the past one week after a mysterious disease killed their milch cattle.

So far, 12 buffaloes and a cow have died of the disease in the village.

When the disease affects the animals, they first get fever and then mysterious white foam emanates

from their mouths before they die. Rekha Devi, pradhan of Patta-Jattian gram panchayat, says adequate compensation should be provided to the affected villagers.

Meanwhile, the villagers say that there is a possibility that the victim milch cattle might have consumed some poisonous substance while grazing on the land close to the reservoir.

Some farmers used to cultivate this land illegally and used chemical fertiliser for growing crops, they said.

The panchayat pradhan informed the authorities and a veterinary doctor from the Bharmar veterinary hospital was rushed to Patta village. Veterinary doctor Manav Guleria told The Tribune that he had informed the district authorities and a team of doctors from the Veterinary Polyclinic, Shahpur, would visit the village to examine the ailing animals. He didn’t rule out the possibility of the animals consuming some poisonous substance.

Krishan Singh and Ashok Kumar, both residents of Patta village, have lost three buffaloes each while Onkar,

Gagan, Koushlya Devi, Kewal, Chain Singh and Sham Lal have lost one milch animal each to the mysterious disease in the past one week.

Docs from Shahpur to conduct check-up