Jammu must have voice: Devender Rana after joining BJP 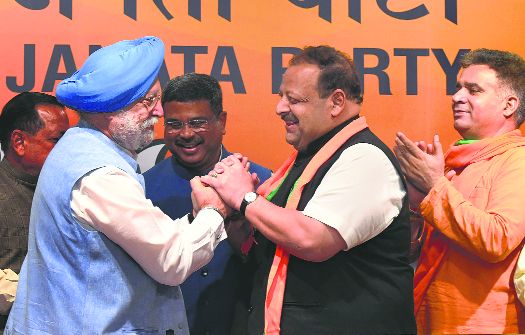 A day after resigning from the National Conference, Devender Rana, the former head of the party’s Jammu division, today joined the BJP along with Surjit Singh Slathia in presence of top BJP leaders, including his brother Jitendra Singh, a Union minister in the Narendra Modi Cabinet.

Rana said the time had come for Jammu to have a voice.

Over 30 members resign from NC

The move coincides with the BJP’s attempts to galvanise support for a Hindu CM and growing voices over Jammu being “neglected” by consecutive governments in favour of the Kashmir Valley.

Rana and Slathia joined the BJP at its headquarters in the presence of Union Ministers Dharmendra Pradhan, Hardeep Singh Puri and Jitendra Singh. BJP general secretary in-charge for J&K Tarun Chugh and its UT unit chief Ravinder Raina welcomed them.

Rana has been advocating for Jammu Declaration, a joint announcement of several political, social and business organisations, demanding to safeguard the rights of Jammu people and also restoration of statehood for the region and not for the whole J&K.

“The Jammu region has suffered hugely. A political narrative must start from Jammu for the entire Union Territory to strengthen its ethos and culture,” he said.

The two senior NC leaders resigned on Sunday, the first major split within the party in the Jammu province since the Centre scrapped the special status of the erstwhile state of J&K in 2019.