304 youngsters get jobs at mega fair in Jalandhar : The Tribune India

304 youngsters get jobs at mega fair in Jalandhar 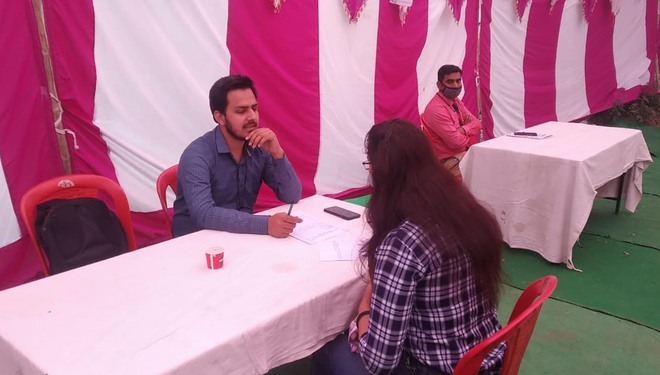 Placement camp in progress at Mehatpur on Tuesday.

The 7th round of mega job fair began in Jalandhar (Mehatpur), on Tuesday under the ‘Ghar Ghar Rozgar’ yojana. The camp was organised at the Block Development and Panchayat Office, Mehatpur, in which as many as 355 youths and 10 companies appeared to shortlist eligible candidates.

A total of 304 candidates were selected by the companies, which include LIC, CSC, SBI, A-One International, Pukhraj Healthcare, ICICI Bank, Narayni Herbal, Herbalife Nutrition and Agile. Under the 7th round, 12 placement camps will be organised in the district, including camps at Shahkot, Lohian Khas, Noormahal, Bhogpur and Adampur, on April 8, 9, 12, 16 and 19, respectively.

Deputy Commissioner Ghanshyam Thori said these job fairs would provide ample employment opportunities to unemployed youths across the district. He said the selection would be done purely on merit basis in a transparent manner.

The Deputy Commissioner called upon youngsters to register themselves at www.pgrkam.com for more jobs, besides reaching the DBEE on 0181-2225791.