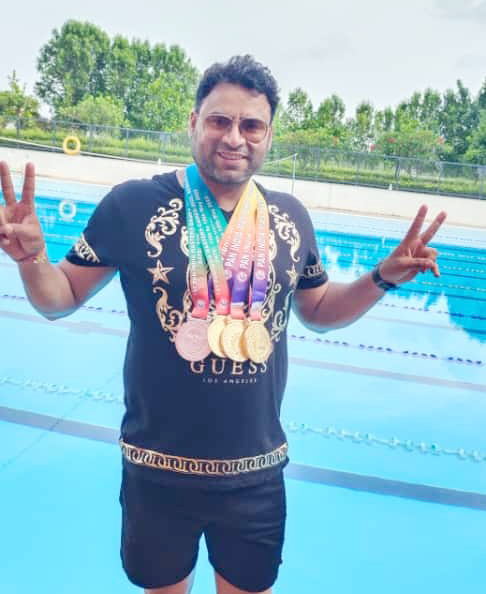 Regwinder Bhatia, city-based physical education lecturer at Government Senior Secondary School, Mand, has brought laurels to the district by clinching three gold and a silver medal in the 100 m butterfly stroke, 200 m race, 450 m medley relay and in 200 m freestyle relay, respectively, in the First Pan India National Masters Games 2022 held at Bengaluru from May 11 to 15.

People in the age group 25-80 years were allowed to participate in different sports events, including badminton, tennis, swimming, weightlifting, football, handball, kabaddi and in athletics the participation was open for all age groups.

Talking to Jalandhar Tribune, Bhatia said this national-level sports meet was the selection trial for the forthcoming World Masters Games 2022 and Japan and Asia-Pacific Masters Games-2023, which will be held in South Korea.

He said seven different swimming events were held under various categories like 50 m, 100 m, 200 m etc and around 500 swimmers, both men and women, from across the country participated in it.

He further said he has remained a swimming coach in the Education Department and was titled as best water polo player of Punjab in 1997. Earlier, he had registered a record by winning 15 medals in various swimming tournaments and remained among the top most swimmers in the state.