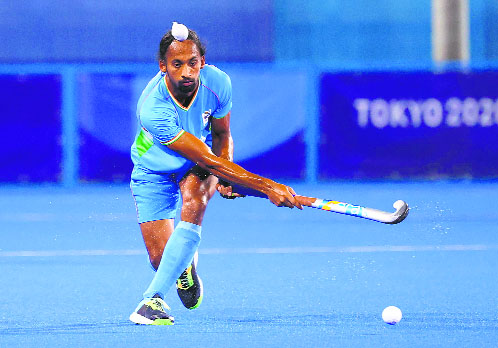 Batala Police SP Varinderpreet Singh, father of midfielder Hardik Singh, who scored a peach of a goal against Great Britain in the quarterfinals, is trying hard to adjust to his new-found fame.

“Hardik called me minutes after the match. He said winning a gold medal was more important for him than scoring goals,” said Varinderpreet, himself a national player from 1996 to 1999. After his magical goal, Hardik looked above and pointed to the sky and murmured something — who was he talking to?

Varinderpreet told The Tribune that Hardik was remembering his grandfather. “His grandfather had this dream of seeing Hardik in the Olympics and when he passed away in 2017, Hardik made this the ambition of his life,” Varinderpreet said. Hardik’s grandfather used to take him to the village ground to practise, and both of them dreamt of the day when Hardik would play at the Olympics.

“Hardik told his mother that he thanked his Daddy (as he used to fondly call his grandfather) for his blessings,” said Varinderpreet.

Remembering Hardik’s childhood, Varinderpreet said he would never go for a family event and would instead go to the hockey ground to play. “Other than hockey jerseys, he never liked to shop for anything,” he said. “Since he hardly attended any family function and always focussed on games, some of my wife’s relatives did not even know that Hardik is our son!” he added.

As recounted by Varinderpreet, these are the exact words of his son about that fabulous goal: “I collected the ball nearly 15-20 yards from outside the circle. I then weaved my way towards the goal from the left side and once the citadel was in clear sight, I pushed the ball in. However, the push lacked punch. I attempted this shot knowing perfectly well that the angle was acute and the goalkeeper had already adjusted himself to block my shot. A moment of sadness followed when the goalkeeper padded away the ball but then, much to my delight, it landed back into play. I rushed towards the centre of the circle but found myself hemmed in by a couple of defenders. I managed to get my stick to the ball but then thought hitting the ball without having much space, which would have meant hitting it without the desired force, would serve no purpose. As if on a hunch,

I pulled the ball a few inches away from the defenders. This gave me enough space, and with it the desired punch, to whack the ball in!”

Hardik belongs to a hockey-playing family which includes former Indian women’s team captain Rajbir Kaur and her husband Gurmail Singh, who was part of the 1980 Moscow Olympics gold medal-winning team. India’s former star drag-flicker Jugraj Singh is his uncle. Varinderpreet said he was flooded with calls once the match was over.