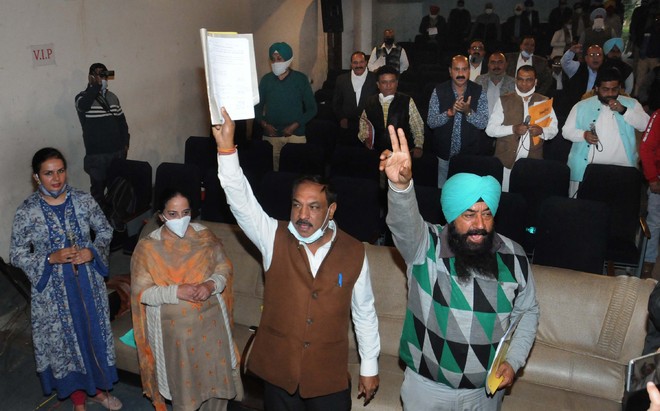 The MC General House meeting took place at the Red Cross Bhawan here on Tuesday. At the beginning of the meeting, Mayor Jagdish Raja insisted on first clearing the agendas while some councillors pursued him to hold zero hour first. In the middle of the zero hour, the agenda branch officials started passing the agendas, an enraged Jaspal Kaur, councillor from Ward Number 45, came on stage and stopped the official to continue speaking and even snatched the agenda documents from him. This created a drama and she said that she would first want answers to the problems of her ward from the Mayor. The latter calmed her down and said that he would listen to her afterwards. BJP councillors also walked out of the hall by boycotting the meeting. When Viresh Kumar, BJP councillor, kept on asking questions from the Mayor, the latter told him that he was crossing the limit. After that Viresh left the hall.

During the meeting, it was also suggested that an elevated road from PAP Chowk to Workshop Chowk via Kapurthala Chowk will be constructed in the city which will resolve the decades old traffic problem. The project will be carried out under the Smart City Project.

Councillor Des Raj Jassal was the first one to raise the issue regarding a private hospital which he had been raising for long. He said that replies given by the officials on the same were not satisfactory and there was nothing concrete. Des Raj asked how much property tax was recovered from the hospital.

A senior official of the MC replied that the notice had been served and 15 days were given to submit the documents. “When the documents come, the exact property tax will be calculated,” the officer said.

But Jassal said that the answer was not proper. “It is the fourth time that I have asked this, that too without any proper answer,” he said. He also questioned Tehbazari Department officials saying that they were recovering Rs 1,000 from poor vendors every month but they cannot recover the remaining due from the private hospital.

The Mayor said that a committee would be formed to look into the matter of private hospital dues.

Neerja Jain, chairman of advertisement ad hoc committee, targeted the advertisement department official. She said, “He has removed 80-100 poles from the city, did he ask us? I have been raising the issue of illegal poles in the city. And they act without even asking us.”

Councillor Anjali Bhagat, also a member of two ad hoc committees (landscape and property tax ad hoc committee) also resigned as a member from both the committees saying that being a member, she wasn’t ever invited to the meetings and there was no use of such committees.

Councillor from ward number 5 said that since the last three years, she did not even have a single safai karamchari in the ward.

Jaspal Kaur, councilor, ward number 45 and wife of former deputy mayor Kamaljit Singh Bhatia, said four safai karamcharis who used to work in her ward had died and no new appointment had come in their place.

Vicky Kalia, councilor, ward number 64 and member of buildings and roads ad hoc committee, said, “ As many as 19 new colonies are being carved out but no action is being taken”.