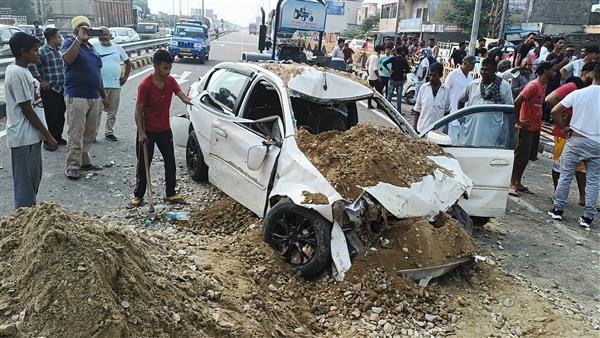 One of the cars that collided with an 18-wheel truck at Behram near Banga in Nawanshahr on Monday. Photo: Malkiat Singh

Sheer negligence of the driver of an 18-wheel truck driver snuffed out the lives of of three members of a Batala family at Behram near here this afternoon.

Batala-based Guriqbal Singh, his wife Ramandeep Kaur and their son Jasmeet Singh were heading towards Nawanshahr when a truck coming from the opposite side suddenly took a U-turn at the Mahilpur T-point. The truck driver took the turn so rashly and on high speed that car drivers coming from the opposite side had no time to stop to save themselves.

The hind part of the truck loaded with sand and stones fell over two cars — Etios and Liva, both of which came under its huge impact. Those in the Etios car suffered some injuries while the family in the other car was not so lucky.

The eye-witnesses said the canter driver took a sudden U-turn and seemed to have gone out of control. Those who gathered at the site took out the victims from the mangled remains of the car but those in the Liva car were not so lucky. They were declared brought dead in the local hospital.

Banga DSP Sarwan Singh Bal said, “We have seen the videos of the accident. It was clearly the negligence of the truck driver, Major Singh. We have lodged a case against him under Sections 304, 427 and 279 of the IPC.”