Pulse polio campaign from Sept 26 to 28 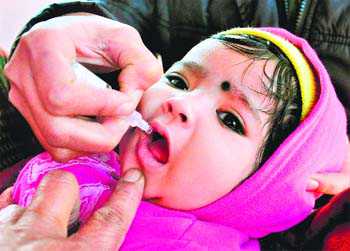 As many as 1,31,761 children in the age group of 0-5 years will be administered polio drops during the upcoming migratory pulse polio campaign from September 26 to 28.

As many as 1,31,761 children in the age group of 0-5 years will be administered polio drops during the upcoming migratory pulse polio campaign from September 26 to 28.

During the workshop, District Immunisation Officer (DIO) Dr Rakesh Chopra said under the campaign constituted by the Health Department will visit slum areas, industrial areas, brick kilns, settlements of Gujjars and will administer pulse polio prevention drops to children. Migrant and industrial labour settlements will also be targeted during the drive. The DIO also instructed staff to strictly abide by Covid norms. They were told to ensure wearing of masks, ensure social distancing and cleansing of hands regularly during the drive.

During the campaign as many as 13,1,761 children will be administered polio prevention drops. The Health Department will cover 2,90,800 houses in the district where teams will administer polio drops to little children.