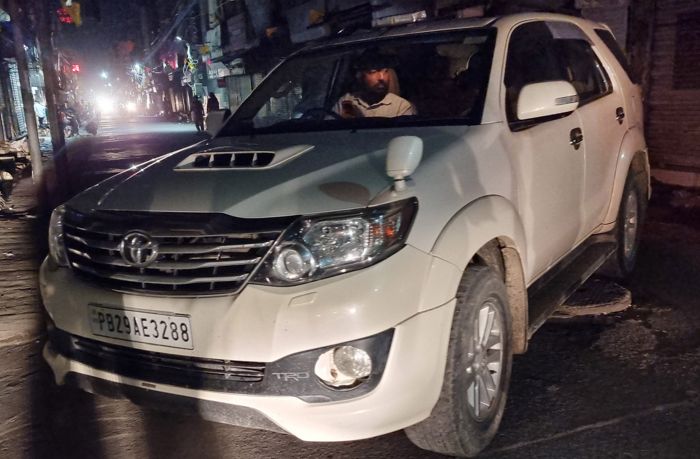 The SUV in which Kashmir Singh, the SHO of the Kotwali police station in Kapurthala, reached the raid site on Friday night. Tribune photo

A Kapurthala SHO has found himself in the midst of a controversy after he reached a scene of dispute with a beacon atop his private SUV while on duty. He was also accompanied by two gunmen in black clothes at the site.

The Kapurthala police have said the men accompanying the SHO were on-duty police employees and also said it was justified to bring private vehicle in a late night emergency.

The SHO of the Kotwali police station in Kapurthala, Kashmir Singh, reached the Sadar Bazar late on Friday night, after being summoned by his higher officials with respect to a raid at a jewellers’ store. The raid was carried out by the Jalandhar and Kapurthala police, DSPs and SHOs also reached the site to control the situation.

Inspector Kashmir Singh showed up at the site in his Fortuner, which was driven by a driver. A video of the diver acknowledging it is the SHO’s vehicle and another video of the SHO accompanied by his two gunmen have gone viral.

Accused of being in an inebriated state, the SHO was tested for alcohol. However, both the SHO as well as the Kapurthala police have denied the charges.

Inspector Kashmir Singh said: “It was my vehicle. We were called to the spot on short notice. I was at my residence and hurried to the spot. I did not have the police vehicle with me at that time so I took my car. Is that a crime? I need gunmen as due to the nature of drugs and other cases we handle, they sometimes come along in civil clothes. Both those men were police employees.”

DSP Kapurthala Maninderpal Singh said, “The SHO can bring along his personal car in emergencies. Since it was late, it’s totally acceptable. The men with him are also police employees. Young people are fit and muscular these days, hence some misunderstood and thought they were bouncers. We will, however, verify if there was any light on his car.”

The DSP added, “Since tempers were high, and it was insisted, an alcohol test was also done on the SHO. But no traces of alcohol have been found on him.”

Sandeep Dhawan, SMO, Civil Hospital, Kapurthala issued a formal statement stating, “The SHO Kotwali was brought by two DSPs. We have taken his blood sample which will be sent to the forensic laboratory for alcohol estimation.”

The SHO can bring along his personal vehicle in emergencies. It’s totally acceptable. The gunmen in civvies were police employees. We will, however, verify if there was any beacon on his vehicle. — Maninderpal Singh, Kapurthala DSP