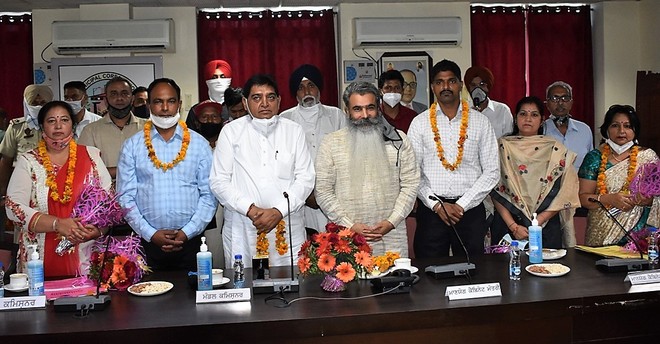 Punjab ministers Sunder Sham Arora and Bharat Bhushan Ashu along with the newly elected Mayor Surinder Shinda and others after the swearing-in ceremony in Hoshiarpur on Monday. Tribune photo

Four-time councillor Surinder Kumar Shinda was sworn in as the Mayor of the Hoshiarpur Municipal Corporation in the presence of Industries & Commerce Minister Sunder Sham Arora and Food & Civil Supplies Minister Bharat Bhushan Ashu here on Monday. Councillor from Ward No.3 Parveen Saini and councillor from Ward No.11 Ranjeet Chaudhary were elected as Senior Deputy Mayor and Deputy Mayor.

The newly elected Mayor, Surinder Kumar Shinda, had earlier served three-time as councillor and at present he is representing Ward No.18, where he registered a victory by getting 1,032 votes. After being elected as the Mayor, Surinder Kumar Shinda thanked Cabinet Minister Sunder Sham Arora and all councillors for giving him a huge responsibility and said he would leave no stone unturned to ensure development and basic amenities in the city. He said besides ongoing projects the new works would also be initiated in the areas where needed by ensuring timely completion of these works.

Earlier, Commissioner, Jalandhar Division, Gurpreet Kaur Sapra presided over the oath-taking ceremony, besides administering the oath of office and secrecy to the newly elected Mayor, the Senior Deputy Mayor and the Deputy Mayor. Apart from all councillors, MC Commissioner Amit Kumar Panchal was also present on the occasion.

Balwinder Kumar Bindi, councillor from Ward No.14, was elected the chairman of the finance committee with Ward No.1 councillor Rajni Dadwal and Ward No.45 councillor Kulwinder Kaur Kapoor elected its members.

Prior to the election of the Mayor, Food & Civil Supplies Minister Bharat Bhushan Ashu and Industries & Commerce Minister Sunder Sham Arora held a meeting with all councillors and gave them a call to get the development works done in their respective areas to facilitate the residents of Hoshiarpur.

Will work in unison: Arora

Congratulating all 50 councillors along the newly elected Mayor, the Senior Deputy Mayor and the Deputy Mayor, Industries & Commerce Minister Sunder Sham Arora asserted that Hoshiarpur would witness unprecedented and massive development in time to come with the support and cooperation of all councillors and residents. He said development at various levels was already going on and new projects would be launched in months to come so that basic amenities as well as modern infrastructure could be provided.

While congratulating the Mayor, the Senior Deputy Mayor and the Deputy Mayor as well as all councillors, Food & Civil Supplies Minister Bharat Bhushan Ashu exhorted them to fulfil the aspirations of people by getting works done in their respective wards. He said the councillors always played a significant role in the development works, building and strengthening of infrastructure. He said the state government was providing adequate funds for development works in urban areas and they should make a plan of their wards to utilise these funds properly.