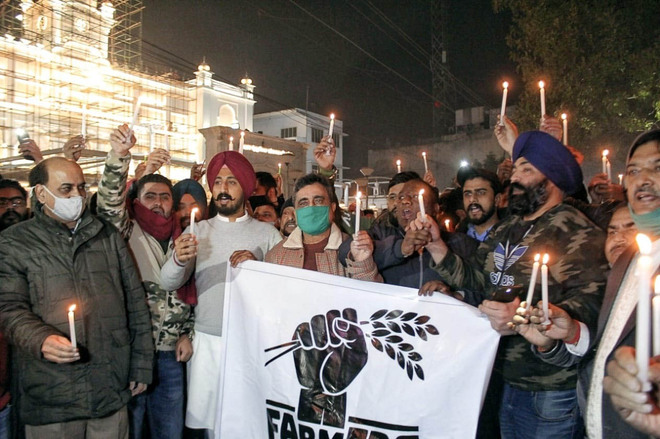 Being the first industry forum to come out in the open to support farmers at such a large scale, Veopar Sena held a huge candlelight march in the city on Monday, through which a message was also spread that the farmers’ movement was not only restricted to one religion or community.

The participation of traders was overwhelming, as hundreds of traders and industrialists marked their presence and expressed solidarity with farmers. Everyone shared their thoughts during the march. Holding banners, traders’ message was loud and clear — ‘Farmers matter’.

President Ravinder Dhir said several meetings had already been held with farmers, but nothing was being done by the Central government.

“This was not acceptable. How can they do this to farmers? If farmers suffer, we will all suffer,” he said.

On December 6, some industrialists had pasted banners highlighting ‘We Support Farmers’ outside their units and shunned work from 8 am to 3 pm.

The industrial organisations that supported the Bharat Bandh included the Jalandhar Industrial Focal Point Extension Association, Udyog Nagar Manufacturers’ Association and Northern Chamber of Small and Medium Industries. Meanwhile, some industrialists said although they were in support of farmers, they could not halt activities at their units.