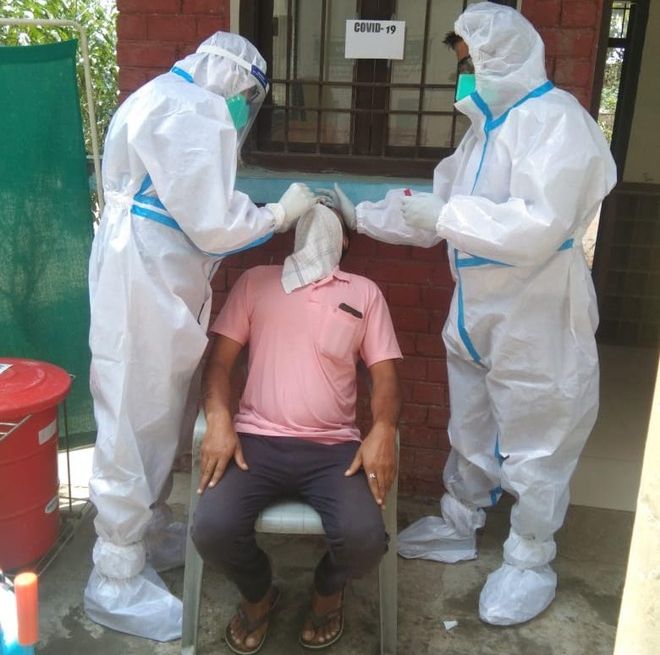 A doctor being assisted by a lab technician (right) in taking a sample at the Community Health Centre, Sidhwan Bet. Tribune photo

They work behind the scenes but also contribute to the fight against Covid on frontline.

Doctors, nurses, police officials are being appreciated by everyone for their frontline duties but we forget to acknowledge the work done by lab technicians. They are the ones who play a major role in detection of the virus. There are 1,270 laboratory technicians in the state who are working day and night during the pandemic.

What the technicians are asking for is not much but an acknowledgment that they, too, are among the frontline workers fighting the disease.

He is at present under home quarantined.

Working at the Primary Health Centre, Talwandi Kalan, Manjit Singh, president of the Lab Technicians' Association, Ludhiana, said working long hours while wearing a PPE kit in summers was a big task. Some technicians work from the laboratory while some go out in the field with teams and collect samples.

"The sample is collected by an expert doctor while the duty of the lab technician is to preserve it safely and send the same to the lab for testing," he said.

With temperature soaring every day, many times lab technicians fall unconscious in their PPE kits.

"We make roasters for going out in field so that nobody feels overburdened," he said.

Mohan Lal, a lab technician from Sangrur, said he had never faced such a difficult situation in his career but they need to rise to the occasion.

"This is a testing time we are going through and we all are ready for the same," he said.

Jagdish, another lab technician from the local Civil Hospital, said they prefer not to have lunch break these days and work at a stretch as a lot of time was wasted in between for changing kits and sanitisation.

"We are provided more than one kit, if required, but we prefer not to take breaks during work. We have to keep our immunity strong and are paying attention towards that," he said.

Remain in PPE for six hours on duty

Lab technicians have a six-hour shift and they are not allowed to go anywhere or remove the PPE kit till the end of their shift. After the shift, they discard the PPE kits in special baskets and sanitise themselves before returning home. They don't take water or food till they are under the protective gear.