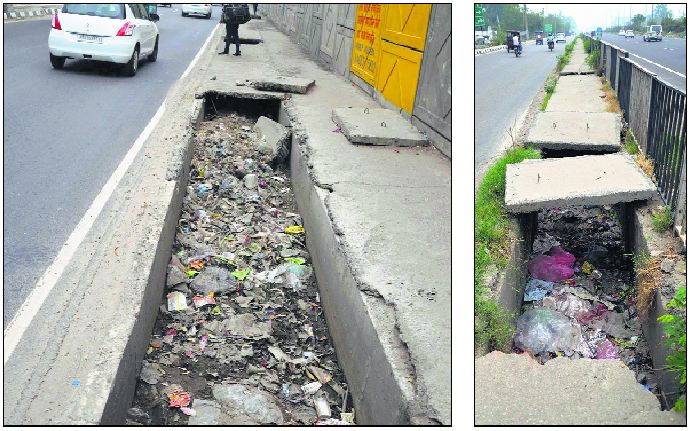 Garbage littered in storm water drains without coverings along the national highway near the Jalandhar Bypass in Ludhiana. Photos: Inderjeet Verma

The storm water drainage lines along the national highway near the Jalandhar Bypass and other locations are still lying flooded with waste as the National Highways Authority of India (NHAI) failed to take necessary measures in this regard.

Covers of storm water drainage lines have also broken at some places, giving an invitation to mishaps.

Waterlogging is generally occurred at different points on the national highway in the city as the drainage system does not function properly. Residents want the administration to take up the matter with the authorities concerned to avoid water accumulation on the highway.

A city resident, Rajat Sood, said it seems the NHAI had not ensured the cleaning of such drainage lines for a long period.

“There is no maintenance of the storm water drainages that are lying choked due to collection of waste. Whenever it rains, the drainage system does not function, resulting in water accumulation on the highway near Giaspura Chowk, Jalandhar Bypass, Sherpur Chowk and other points. It is the responsibility of the NHAI to resolve the problem of waterlogging as hefty toll taxes are being charged from commuters,” he said.

MC’s Superintending Engineer Rajinder Singh said recently, the MC Commissioner had also asked the NHAI officials to take steps to make storm water drainage system and harvesting wells functional in a proper manner. The matter was raised before the NHAI in the past too.

Waterlogging on NH a regular feature

Waterlogging is generally occurred at different points on the national highway in the city as the drainage system does not function properly.