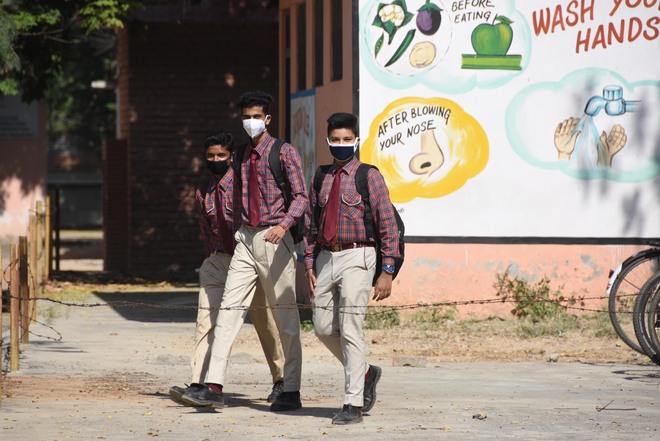 Students on their way to classrooms at a government school in Ludhiana on Monday. Tribune Photos: Himanshu Mahajan

Just about 12 per cent attendance of students was witnessed in the government schools today (as per the data given by the DEO office) after the state government gave its nod to open the schools for higher classes from classes IX to XII.

The reason behind this seemed to be the persisting fear and panic among many parents here.

DEO Swaranjit Kaur said there was 12 per cent attendance in the schools, however, this could not be compared with normal days’ attendance as only those students, who got consent from parents, were coming and they were not being forced to attend classes by schools.

Meanwhile, the government school managements ensured that all standard operating procedures (SOPs) sent by the department were followed. The students were properly sanitised and it was ensured that students and teachers maintained the social distance.

In many schools, the classes were sanitised, the water coolers and tanks were cleaned so that there were no chances of anybody catching the infection.

One of the teachers said many parents were not convinced and many of them were reluctant to send their wards to schools. “I feel slowly, this panic will be out from the minds of parents and more students will start attending the classes physically,” said the teacher.

Many private schools have already opened and started classes for students studying in higher classes. It is expected that in the days to come, almost all schools will be opened as the Covid graph has shown a decline in the past 15 -20 days.