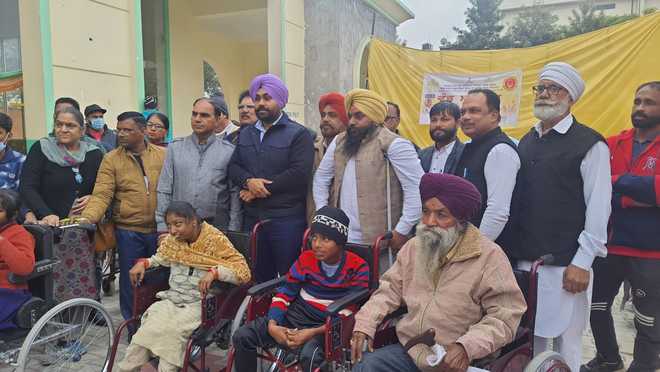 Wheelchairs being distributed among Divyangs in Ludhiana.

A host of initiatives and facilities were launched to help differently abled persons in the district, the administration has claimed.

A coeducational school for blind students, a home for mentally retarded (MR) children, an orphanage, a special DEd school and a vocational resource centre for specially abled girls were opened at Braille Bhawan spread over 12 acres located on Chandigarh road in Jamalpur here, the officials have said.

A special district-level function was held to mark the International Day of Persons with Disabilities at Braille Bhawan. Various activities were held on ‘Leadership and participation of persons with disabilities towards an inclusive, accessible and sustainable post-Covid world”, which was the theme for this year’s celebrations.

He said a coeducational school for blind with hostel facility was at present catering to 65 students from various parts of Punjab, Haryana and Himachal Pradesh. It was the only school in Punjab, which was accredited by the Punjab School Education Board, producing Braille material such as books and stationery.

A home for mentally challenged children was providing support to 30 such inmates. An orphanage, also known as a children home, was at present housing 35 orphan boys.

“Guiding them on a day-to-day basis, follow-up till the age of 21 and help to get them a decent job were provided with the help of experts in various fields,” said the DC, while adding that some inmates at the orphanage have already been employed with different government departments.

A special DEd school offers a three-year DEd diploma course to students, who were taught by uniquely trained teachers from across the state.

A vocational resource centre for specially abled girls was offering computer skills training, cutting, tailoring and embroidery courses free of cost. The centre also provides Rs 1,500 stipend per month to each girl student and a certificate post completion of the course, which helps them become self-sustained.

Sharma said issuing special UDID cards for persons with disabilities was also on the top priority, with Ludhiana district leading the state by generating over 28,000 cards as of now.

Divulging details of activities held to mark the International Day of Persons with Disability, ADC (Development), Amit Kumar Panchal, said the administration along with the Department of Social Security, held a series of programmes, including a cultural event. The event was focused on awareness and to highlight the rights and dignity of specially abled.

“Focusing on identifying divyang persons, a camp was held for registration of jobs, providing training as a skilled worker and job placements. Cultural activities and events were organised to engage them and celebrate their special day,” he said.

A medical and health check-up camp was also arranged for the routine examination of specially-abled, orphans, MR, visually challenged children and elderly. A team of doctors from the Civil Hospital examined and treated the needy. Pension forms were filled for the elderly, assisting them with formalities, getting old-age benefits across schemes.

A voter awareness and registration camp was also arranged as a SVEEP activity, to ensure that no person with disability was left out without the voting right during the ensuing state elections.