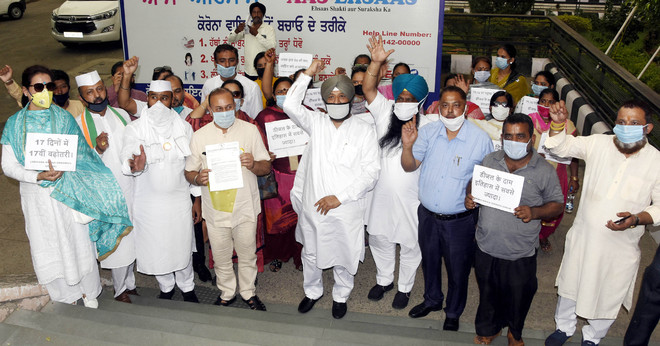 Members of the District Congress Committee today protested the rise in the prices of petrol and diesel. Later, they submitted a memorandum to the Deputy Commissioner to be forwarded to the Prime Minister. The Congress held protests across the country over the fuel price hike. The party is demanding immediate roll back of the hike.

President of the committee Ashwani Sharma said in these difficult times, the government should give a relief to its citizens but it was adding to their woes by increasing the fuel rates.

“The fuel prices have been increasing for the past 20 days. Due to the pandemic, the demand has fallen. The stocks are available but the government is increasing the prices and burdening people. The hike should be rolled back,” Sharma said.

He said the middle class was hit hard by the hike. People were already facing an economic slowdown, despite that the government was increasing the fuel prices.

Mandi Ahmedgarh: Office-bearers and activists of various political and trade organisations have threatened to launch a coordinated movement to impress upon the Union Government to withdraw its decisions of increasing prices of essential goods, including petrol and diesel, at a time when all sections of society were stressed due to the pandemic.

Road blockades and protest rallies were organised at various places in the region.

The protesters, led by Gill legislator Dr Kuldeep Singh Vaid alleged that the Centre had been illogically increasing prices of petrol and diesel, thus affecting members of all sections of society, including farmers, labourers and traders.

“Unfortunately, the Union Government, led by Prime Minister Narendra Modi has failed to apprehend that any hike in prices of petrol and diesel was bound to increase prices of all essential commodities,” said Dr Vaid.

Speakers alleged that the Centre had failed to protect rights and interests of the common man during the the lockdown.

Earlier, office-bearers and activists of various units of the CPM and the All India Kisan Sabha had organised meetings at Ghungrana, Jartauli, Lohgarh, Latala and Chhapar village to rope in members of various social and trade organisations to join the coordinated movement being launched against the Central Government. Sikandar Singh Jartauli, Baldev Singh Latala, Joginder Singh Aulakh and Bhupinder Singh Purba convened meeting in their respective areas.

He has demanded from the Central Government, led by Prime Minister Narendra Modi, to reduce the fuel prices at the earliest.

Yadav said the Covid crisis had badly hit the businesses.

“Now, farmers, traders and other people are forced to suffer due to hiked fuel prices. We condemn the hike during these difficult times. The Centre should reduce the fuel prices,” he said.

Giving a warning, members of the party said they would start an agitation across the state if the fuel prices were not decreased.