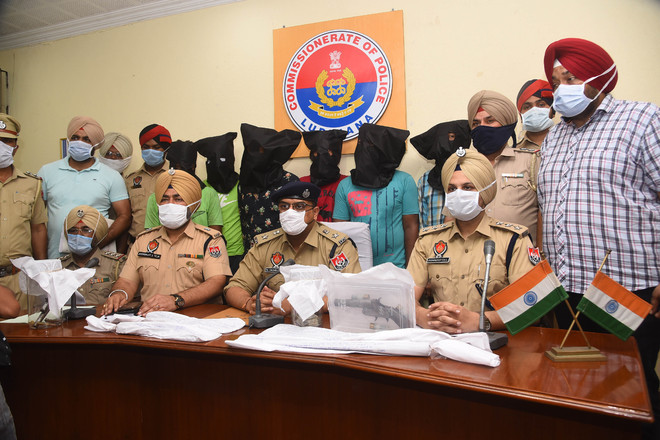 The city police arrested six members of a gang of thieves and snatchers from near the Dhuri Line rail overbridge in Dugri on Sunday while planning a major crime. Two country-made pistols, four datars (swords), one stolen scooter and a stolen motorcycle were recovered from them.

Two country-made pistols, four datars (swords), one stolen scooter and a motorcycle were recovered from the six suspects, who were arrested near the Dhuri Line rail overbridge in Dugri on Sunday while planning a major crime.

The police said the arrested members of the gang were being interrogated to know the trail of crime committed by them in the city and elsewhere in the state.

Balbir Singh, a resident of Lakhowal village in the district, employed as a security guard in auto parts manufacturing firm Jyoti Auto India Factory on Raina-Bhagpur Road, was arrested by the police and charged under Section 381, IPC, for allegedly stealing auto spare parts from the factory.

In a complaint to the police, owner of the firm Yuvraj Kaushal, a resident of Tagore Nagar, told the police that the suspect used to steal auto spare parts from the factory during night and would take the same with him in the morning after his duty.

The police have booked two persons, Sahib Singh, a resident of Sahibzada Fateh Singh Nagar, and his accomplice Jasvir Singh, a resident of Nanak Nagar in Shimlapuri, under Sections 379-B, 341 and 34 of the Indian Penal Code ()IPC) for allegedly snatching a mobile phone and Rs 1,600 from Anirudh Yadav, a resident of Giaspura. The victim said he was going home on his motorcycle after his duty when the duo, riding a Bajaja Platina motorcycle (bearing registration number PB 10EZ 5748), followed him and snatched the mobile phone and cash at sword point.