Vehicular movement shut by authorities without any public announcement 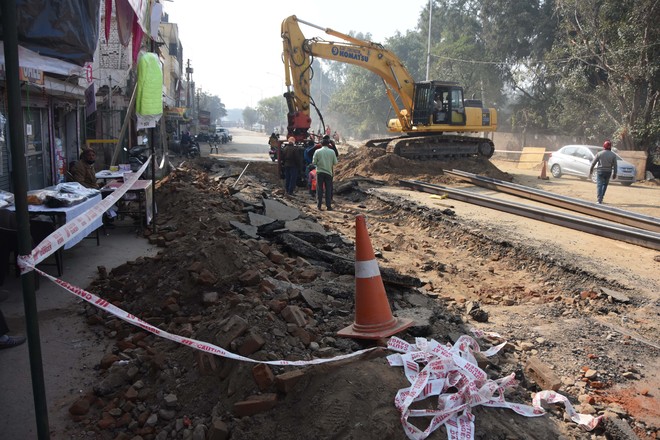 The ongoing work of ROB and RUBs on Pakhowal Road in Ludhiana. Tribune Photo: Himanshu Mahajan

Commuters were a harried lot today due to long traffic jams at different locations after the vehicular movement on the Pakhowal road (from near the Sidhwan Canal bridge till Hero Bakery Chowk) has been closed in view of the ongoing project for the construction of rail over bridge (ROB) and two rail under bridges (RUBs).

Besides, barricades have been placed near Lal Path Labs on a road (Leisure valley Road) in Sarabha Nagar while ignoring the houses located on this stretch.

Some residents have complained over the closure of this Sarabha Nagar road leading to a number of houses.

Notably, Ludhiana Smart City Limited (LSCL), the Municipal Corporation or Railways had made no prior public announcement about the traffic diversion plan before closing the vehicular movement on the Pakhowal road stretch and a road in Sarabha Nagar for the ongoing ROB and RUBs project. Thus, the commuters were forced to suffer in traffic jams at Ishmeet Singh Chowk, Krishna Mandir Road and Model Town today. After people suffered in the traffic jams, an announcement was made about the closure of Pakhowal Road stretch where the ROB and RUBs’ work is under way.

Many commuters coming from the Phullanwal side reached Hero Bakery Chowk through alternative routes after getting stuck in traffic jams. A commuter, Gagandeep Singh, said, “I was stuck in a traffic jam for some time near Ishmeet Singh Chowk today. The authorities concerned must take steps to manage the traffic so that commuters don’t face any inconvinience.”

Rahul Verma, a road safety activist and a resident of Sarabha Nagar, said, “No traffic diversion plan was announced by the MC and the LSCL before closing the vehicular movement. Even a way leading to some houses in Sarabha Nagar was closed, making the residents to suffer a lot.”

An official deployed by a private firm, which is constructing the ROB and RUBs, said some of the residents of Sarabha Nagar had complained that they faced inconvenience due to the barricades placed near Lal Path Labs. Now, these barricades would be placed near Sacred Heart Convent School, he said.

Other projects move at slow pace

Earlier, some activists had sought from the MC to get the Vikas Nagar Railway crossing reopened at the stretch between Pakhowal Road and BRS Nagar along Sidhwan Canal to ease the traffic. Notably, the Vikas Nagar level crossing was earlier closed when the Southern Bypass Rail Over Bridge was constructed. Also the construction work on a slip road (from Canal Bridge on Pakhowal Road towards Jawaddi) under the Southern Bypass project is still incomplete even after the passing of a decade. The project is being looked after by the PWD, but no concrete efforts were made to complete this slip road work timely.