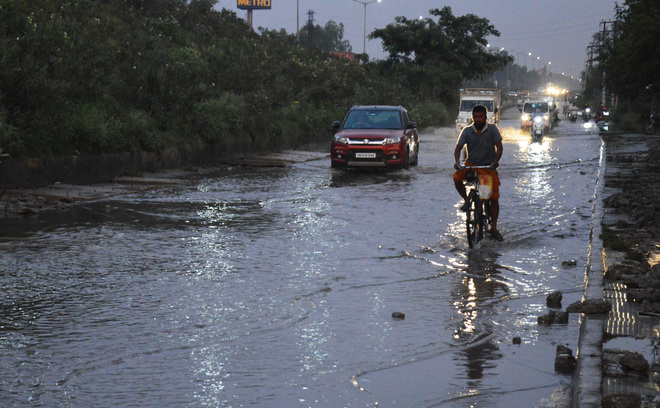 A waterlogged road near Jalandhar Bypass in Ludhiana on Wednesday. Photo: Inderjeet Verma

Waterlogging occurred again on some locations on national highways, including Ludhiana-Chandigarh Road and Delhi Road, in the city as the rain lashed here on Wednesday.

Residents on Chandigarh Road (national highway) complained that sewers overflowed after the rain started and water accumulated near Police Colony Chowk. Water also accumulated near Malhotra Palace, Jalandhar Bypass and Giaspura Chowk on the NH-44. Besides, water was accumulated on the PSPCL office road in the Giaspura area, Hambran Road and other areas.

Premjeet Singh, a resident of the Chandigarh Road area, said: “Water accumulated on the highway again as nothing was done at the ground level to resolve the problem.” RK Yadav of the Yadav Ahir Mahasabha said they had complained multiple times but the waterlogging issue on Giaspura Road near the PSPCL office was not resolved. Upkar Singh Sahni, an industrialist, said: “The MC should find out a permanent solution to resolve the issue on Giaspura Road as we have been suffering due to the same.”

Meanwhile, Mayor Balkar Singh Sandhu, MC Commissioner Pardeep Kumar Sabharwal and councillor Mamta Ashu inspected Malhar Road where a Smart Street project work is underway. As the rainwater was getting accumulated along the roadside, they pulled up officials. The Commissioner directed them to take steps in this regard.

He said: “There were no complaints regarding waterlogging today. The rainwater was getting drained out easily.”

The MC Commissioner said they would take necessary steps to resolve the waterlogging problem on Giaspura Road.

He said the storm water drainage would be installed on Chandigarh Road and tenders for the same had already been floated.

According to the School of Climate Change and Agricultural Meteorology, PAU, Ludhiana, 38.4 mm rainfall was recorded till 2:30 pm today. Rain continued till the evening.

Regarding the water accumulation issue on Malhar Road, Mayor Balkar Singh Sandhu said the contractor and officials concerned had been directed to resolve the issueat the earliest.