Husain, hurricane of a kind! 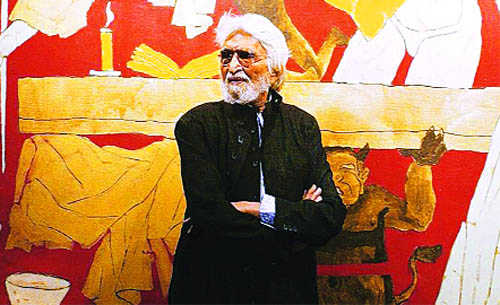 It was in the mid-summer of the early ’70s that I met MF Husain for the first time. We, a group of two artists, were holding an exhibition of our paintings at a gallery of AIFACS in New Delhi. In those days, very few visitors would visit art galleries in the summer. But lo and behold, one afternoon, Husain, whom I always admired since my art school days, dropped by. Looking keenly at each work, he spent quite some time there, but left without having a word with us. Surprisingly enough, he returned to the gallery a minute or so after his leaving. He went straight to one of my small-sized paintings and gave it a closer look. While pointing towards that painting, he patted me and left. It was an encouraging moment that I have been cherishing.

My next meeting with him was in the beginning of the ’80s, when he came to Chandigarh for helping a charitable organisation that was running a home for the destitute and physically challenged children, through the sale of artwork.

Apart from donating some of his graphic prints and posters, Husain painted on the spot six small canvases in less than two hours, like a possessed hurricane! While each of his freshly executed painting was priced at Rs 5,000, his graphic prints were priced at Rs 500 each. Not so strangely, all those works were sold then and there and fetched more than Rs 40,000 for the organisation.

I do not remember the people who had purchased his works then for a charitable cause. Today, they must be thanking their stars for such a profitable investment, for in a recently held auction in Mumbai, one of Husain’s 1972 painting titled, ‘Battle of Ganga and Jamuna’, fetched a record price of Rs 13.44 crore!

While Husain was painting, in his inimitable quick style, I clicked the growing process of one of his paintings, from a blank canvas to its finish. Out of about 30 photographs, a dozen of them were published, along with a small write-up, as a photo-feature in the then popular, but now defunct The Illustrated Weekly of India. While remembering Husain on his 105th birth anniversary, one cannot forget the way we, as a country, mistreated him. On the one hand, the government bestowed upon him many national honours, including Padma Shri (1966), Padma Bhushan (1973) and Padma Vibhushan (1991), but on the other, it allowed the knitting of an uncongenial atmosphere around him. He remained in a self-imposed exile from 2006. Husain reportedly kept longing to return to his homeland till his death in 2011.

His birth anniversary falls on September 17. Since true artists cannot be bound by geographical or religious boundaries, Husain would be remembered with great pride and respect by one and all.