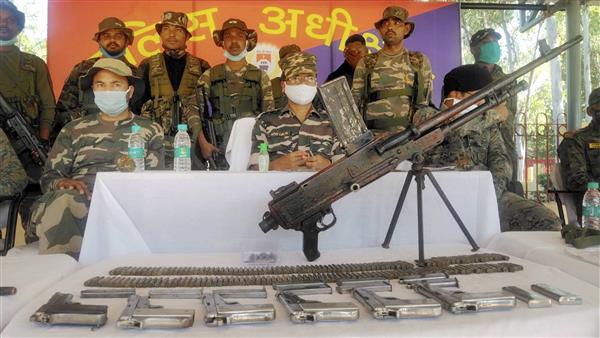 “All the best...kill the beast” was probably one of the last messages sent over phone by 33-year-old CoBRA officer Nitin Bhalerao who died on Sunday after being injured in an IED blast triggered by Naxalites in the jungles of Chhattisgrah’s Sukma district a day earlier.

Bhalerao, who was posted with the 206th CoBRA battalion, sent the message over Whatsapp around noon on Saturday to a batch-mate posted in another CoBRA unit who, like him, was planning a field operation.

The Commando Battalions for Resolute Action (CoBRA) was raised by the Central Reserve Police Force (CRPF) in 2009 as a special guerrilla combat unit for undertaking anti-Naxal operations as well as combating insurgents in the northeast.

The assistant commandant-rank officer succumbed on Sunday to injuries from the improvised explosive device (IED) blast, which took place in the Arbajmeta area of the Chintalnar forests around 9 pm on Saturday.

“He was a daring and talented officer and one of the best in the CoBRA. He volunteered to join the special unit last year after he had a stint with the special duty group that secures the Parliament in Delhi,” a senior CRPF officer told PTI as he remembered the commando.

Bhalerao had joined the Chhattisgarh unit in June.

He was a decorated officer as he won combat competitions and participated in all-India police commando duty meets. He was very close to his mother who raised him after he lost his father very early, the officer said.

Bhalerao, who would have celebrated his 34th birthday on December 21, was very fond of his six-year-old daughter Vedangi, he said.

“Bhalerao was a very committed trooper and this was evident from the fact that he joined the CRPF in 2010 as a sub-inspector but he worked hard and cleared exams to be appointed as a gazetted officer in 2018,” the officer added.

His last rites will take place on Sunday at his home town in Nashik in Maharashtra.

A total of 10 commandos including Bhalerao were injured in the blast, including the team leader and second-in-command rank officer Dinesh Kumar Singh.

While seven personnel are under treatment at a hospital in Raipur, two are being treated at a field hospital at Chintalnar in Sukma, about 450 km from the Chhattisgarh capital.

The officer said that all nine are out of danger.

A joint team of the CoBRA and the local police was out for an area domination exercise when the blast took place.

The team was scouting the area for the proposed induction of some new battalions of the CRPF and establishment of new camps when the IED went off, official sources said.

Five fresh CRPF battalions are expected to be inducted in the south Bastar region of Chhattisgarh for anti-naxal duties after the Union Home Ministry recently gave its approval. — PTI