Large quantities of incriminating materials have been seized from their possession 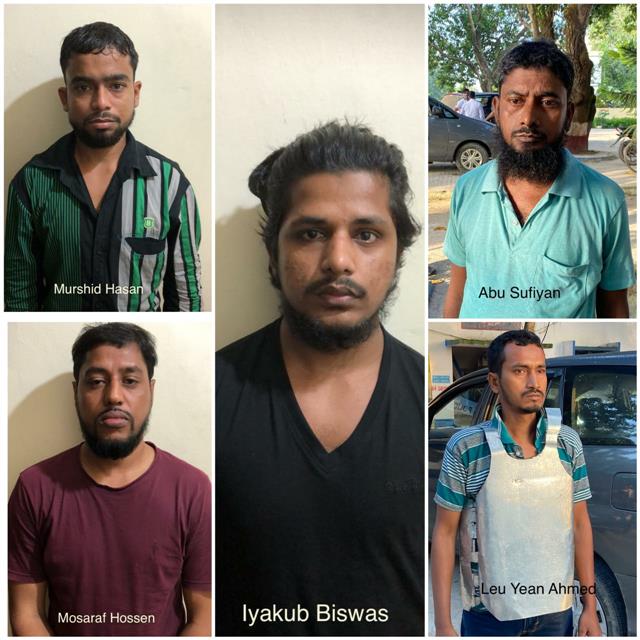 Five of the nine suspected terrorists arrested by the NIA on Saturday morning.

In a significant breakthrough, the National Investigation Agency, (NIA) conducted searches and raids at Ernakulam (Kerala) and Murshidabad (West Bengal) in the wee hours of Saturday and arrested nine suspected terrorists for their alleged association with Pakistan-sponsored module of the Al-Qaeda in the country.

A senior NIA official said the agency got a tip-off about an inter-state module of Al-Qaeda the operatives at various locations in India, including West-Bengal and Kerala, which was allegedly planning to undertake terrorist attacks at vital installations in India with an aim to kill innocent people and strike terror in their minds.

“Accordingly, the NIA registered a case and initiated investigation,” the official said, adding that the raids were part of this exercise.

Hasan is the leader of the gang and those arrested from Kerala are also originally residents of West Bengal, the NIA spokesperson said.

“The operations were conducted in the early morning. Large quantities of incriminating materials, including digital devices, documents, jihadi literature, sharp weapons, country-made firearms, a locally fabricated body armour, articles and literature used for making home-made explosive devices have been seized from their possession,” the official said.

The NIA said in its initial investigation that it was found that these individuals were highly radicalised by Pakistan-based Al-Qaeda terrorists on social media and were motivated to undertake attacks at multiple places, including the National Capital Region. Some members of the gang were also planning to travel to New Delhi to procure arms and ammunition.

A closely-monitored operation of the NIA and other central agencies began on September 11 when the premier investigating agency registered a case to probe the Al-Qaeda module.

According to the official, crackers were being attempted to be converted into an Improvised Explosive Device (IED) and the NIA recovered switches and batteries from Abu Sufiyan's house during the raids.

The group was also planning to go to Kashmir for weapons delivery as it intended to launch terror attacks on vital installations in the country with an aim to kill innocent people, the official said.

The arrests of the operatives had pre-empted possible terrorist strikes in various parts of the country, an NIA official said.

“For this purpose, the module was actively indulging in fundraising and a few members of the gang were planning to travel to New Delhi to procure arms and ammunition. These arrests have pre-empted possible terrorist attacks in various parts of the country,” the official said, adding that the arrested terrorists will be produced before the concerned special courts in Kerala and West Bengal for police custody and further investigation.

The nine accused will be produced before the concerned courts in Kerala and West Bengal for police custody to facilitate further investigation.

According to the officials investigating the case, the arrested men are highly radicalised and were getting instructions from foreign handlers, including Pakistan-based al-Qaeda operatives, in cyberspace.

The module was planning to target vital installations in India as well as targeted killings.

It was in the advanced stage of procuring arms (including automatic rifles and pistols), ammunition and explosives to carry out attacks.

Some of its members were trying to develop expertise in IED-making too.

Besides, the module was trying to establish a well-organised Al-Qaeda network in different parts of the country, including the northeast and Jammu and Kashmir, on the instructions of the Pakistan-based handlers, the official said. — With inputs from PTI