Piped water to all rural houses will end discrimination: PM after Jalore incident : The Tribune India 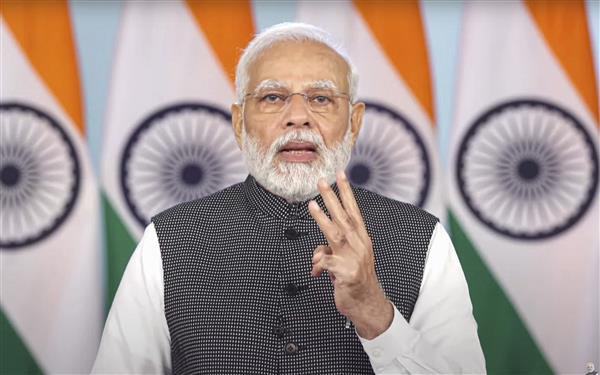 Close on the heels of a Dalit boy's tragic demise in Rajasthan's Jalore after he drank water from a pot meant for his teacher, Prime Minister Narendra Modi on Friday said supply of piped drinking water to rural households under the Conserve Water Mission would end all discrimination besides benefitting women and girls by saving the time they spend in procuring water from external sources.

The PM was speaking at a virtual event to mark Goa's achievement as India's first ‘Har Ghar Jal’ certified state.

Previously, Daman and Diu and Dadra and Nagar Haveli were approved as Har Ghar Jal certified UTs with all rural households linked to piped water supply.

“There can't be a better start to Amrit Kaal. In the past just three years, 7 crore rural households have been connected with piped water facilities. This is more than double of 3 crore such connections given in the seven decades since Independence,” said the PM noting that this fast paced success under Jal Jeevan Mission has become possible through four pillars -- people's participation, collaboration, political will and optimum utilisation of resources.

Describing water scarcity as a potential challenge in the path of India’s development, the PM said the government was working to tide over this crisis and had set up a standalone Jal Shakti Ministry for the purpose.

He said women and girls are at the centre of the Jal Jeevan Mission and added that in the first seven decades post-independence, 16 crore rural households had to depend on external sources for water.

“We could not have allowed such a large proportion of our village people to continue their struggle for a basic facility like water,” the PM said, adding that India was fast moving towards the goal of cent per cent linkage of all rural households with piped water.

The PM noted, "Once all rural houses are connected to piped water and saturation is reached, the scope of discrimination and favouritism will end."

The Jal Jeevan Mission is progressing at an outlay of Rs 3,60,000 crore, said the PM describing the campaign as a fine example of ‘Sabka prayas’.

The PM also announced that today one lakh of India's 5 lakh plus villages had become open defecation free by adopting modern methods of waste management.

Noting that top global institutions had predicted water scarcity as a major challenge of the 21st century, the PM said lack of water could become a major hurdle in the way of developed India too.

“To tide over this crisis, we need to work 24 hours with the spirit of service. The government has been working towards water security goals since the very start,” he said, adding that forming a government does not require much effort but building a nation does.

Only recently 75 of India's wetlands have been declared Ramsar sites, the PM noted, adding, "Out of these, 50 have been included in the last eight years."

He described Jal Jeevan Mission as a fine example of Mahatma Gandhi’s gram swaraj, noting that villagers were taking ownership of the programme with even the cost of water being fixed at the village level and more than 10 lakh women trained in water testing.