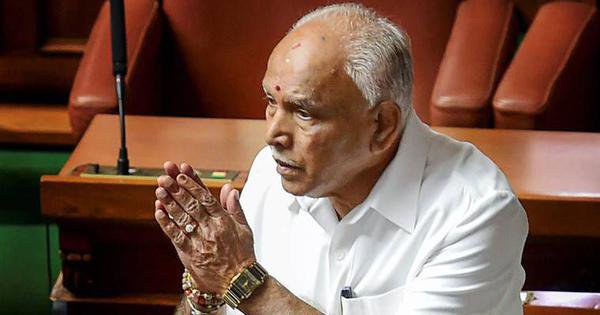 Ending days of speculation, Karnataka Chief Minister BS Yediyurappa on Monday resigned from the position after making an emotional speech at a function to mark two years of his government in the Vidhana Soudha.

"I have decided to resign. I will meet the Governor after lunch," the 78-year-old CM said as he talked of various challenges he overcame to reach where he had and also during his tenure, which, incidentally, he was not able to complete even this time.

Meanwhile, all eyes are now on the BJP's choice to replace Yediyurappa, a popular mass leader in his own right. Several prominent names are doing the rounds but it remains to be seen who will be the next CM to take over from the Lingayat strongman.

Ever since his exit became imminent, Veerashaiva-Lingayat seers from different parts of Karnataka had been demanding that Yediyurappa be allowed to continue.

They said solutions should be found under the leadership of Yediyurappa and that he should not be replaced. "Karnataka will face more problems if he is removed,” some said, blaming the RSS for the change in leadership.

However, under pressure from detractors, Yediyurappa on Monday marked, what can be called, a graceful exit from the post.

BJP president JP Nadda on Sunday had ruled out a leadership crisis in Karnataka.

Later, Yediyurappa said he had resigned on his own, and there was no pressure on him. He said he would continue to work with the BJP.

Yediyurappa drove to the Raj Bhawan to submit his resignation to Governor Thawarchand Gehlot. He was accompanied by several of his ministers.

Speaking to the media, Yediyurappa thanked Prime Minister Narendra Modi, Union Home Minister Amit Shah and BJP president JP Nadda for their support. "They gave me an opportunity to continue even after crossing the age of 75. I am grateful to them, "said Yediyurappa while he expressed gratitude to the state BJP cadres and people.

Interestingly, while inside the Vidhana Souda he was teary-eyed and very emotional as he talked of 'agnipariksha' he had been facing for the past two years, later, a much-in-control Yediyurappa said: "It has been an honour to have served the state for the past two years.  I am humbled and sincerely thank the people of the state for giving me the opportunity to serve them.

"I gave the resignation on my own. There was no pressure on me to resign. I urge the people to support the new CM. We want the BJP to win. There is no way I will leave the side of the BJP. I will continue to campaign for the party and work for its progress," he said.

Amid the suspense over the name of his replacement, Yediyurappa said he had not nominated anyone to take his place.

Sources, meanwhile, said the choice of the new CM would determine whether or not the central leadership wanted the Karnataka BJP to remain Lingayat dominated as it was with Yediyurappa at the helm.

Apparently, the pressure on him to resign had been building from the beginning of the year. He, however, had certain demands and "bargained hard" for the future of his family and sons BY Vijayendra and BY Raghvendra.