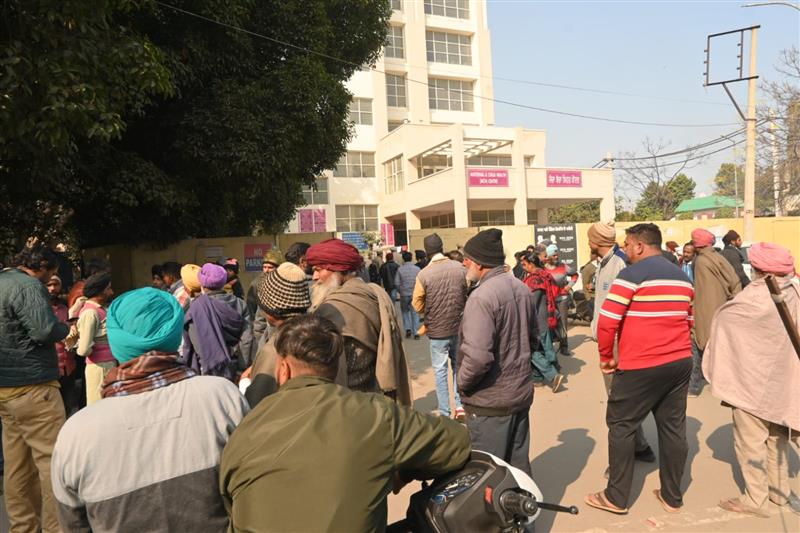 Family members and relatives of the victim held a protest at the Government Rajindra Hospital Patiala over the incident on Sunday. Tribune Photo

The Patiala police have arrested two youth of Balbehra village in Sanour for allegedly raping an 11-year-old girl on Saturday night. The accused have been identified as Amandeep Singh Amani and Dalvir Singh Dalli, who allegedly abducted and raped the minor girl inside a moving four-wheeler on Saturday night. The police have registered a case of rape and kidnapping against the two.

Meanwhile, the family members and relatives of the victim held a protest at the Government Rajindra Hospital here over the incident.

In his complaint, the father of the 11-year-old girl said his daughter had gone to her uncle’s house nearby at around 8 pm on Saturday for some purpose and did not return for long. When he went inquiring for her, the girl turned up and informed that she was abducted and raped by two individuals inside a moving four-wheeler. The girl identified the two as Amandeep Singh and Dalvir Singh of the same village. She said the two dropped her off outside the village and threatened her of dire consequences in case she informed anyone about the incident.

The family then admitted the girl to Government Rajindra Hospital here.

Holding a protest at the Government Rajindra hospital on Sunday afternoon, the girl’s family and neighbours saidthey had caught and handed over one of the accused to the police while the other fled thespot. They saidthey wanted the police to arrest the other accused. Senior officials from the administration also met the family.

Later, police officials at the Sadar police station said they have nabbed both the accused and registered a case against them under Sections 376-D (gang rape), 506 (criminal intimidation), 366 (kidnapping, abducting) and Section 6 of protection of children from sexual offences act.

SHO Sadar Harjinder Singh Dhillon said the two will be produced in a court on Monday morning.