Nobody will be allowed to compromise with health of people: DC 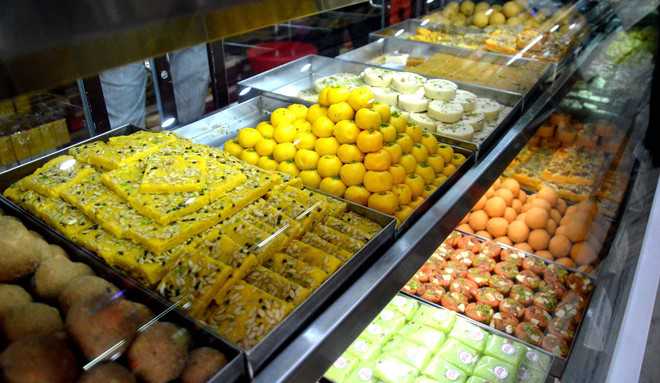 Taking a tough stance on food adulteration, a food safety team collected the samples of milk cake from two vehicles on Saturday evening. The vehicles were intercepted by the Julka police.

Deputy Commissioner Sandeep Hans said that as per information received from the police station Julka, a team led by District Health Officer Dr Shally immediately rushed to the site and collected samples of the milk cake that was procured from outside state for supply in the district.

He said that till the analysis of samples collected from the vehicles, the milk cake in question would be kept under observation in a safe environment in police custody.

After that, it would be decided as per the results of samples.

Deputy Commissioner Sandeep Hans said that this was the second such case in the district during this fortnight, in which samples of sweets have been collected to ensure the quality standards as prescribed by the state government, in wake of festive seasons.

Earlier a tempo carrying petha was intercepted by the Shambhu police on October 4 and samples were collected to check whether the quality was upto mark or not, said District Health Officer Dr Shally. She said that though the samples analysed at food safety lab found satisfactory later on, however, they were taking extra care of health of the people in the wake of festive season.

The Deputy Commissioner said that the Health Department and food safety teams had been directed to not to allow adulteration in food and nobody would be spared, if found guilty and indulged in adulteration.

He made an appeal to the food business operators and sweet shop owners of the district to not to compromise with the quality of their food preparations as it directly linked to the people’s health.