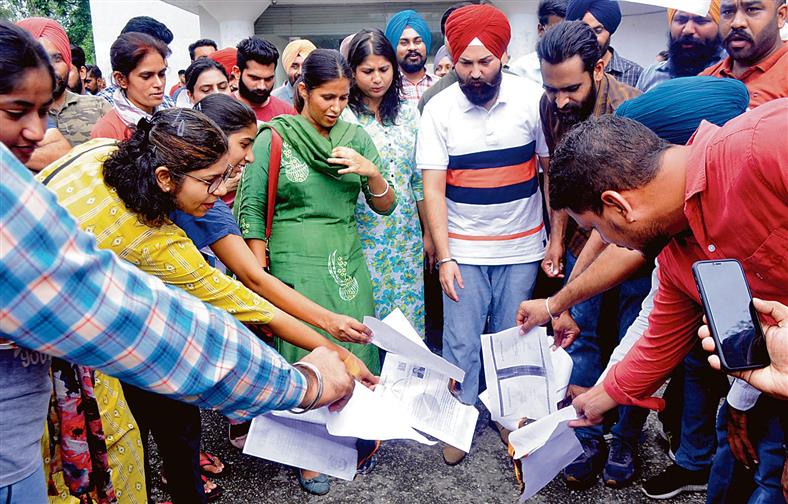 Protesters burn copies of their degrees at Punjabi University in Patiala on Thursday. Tribune photo

Alleging that over 1,500 posts of faculty members in government colleges were lying vacant in 47 colleges in the state, PhD holders and NET qualified students of Punjabi University today held a protest demanding that the state government should start recruitment drive for vacant posts.

Students gathered on Punjabi University campus under the banner of, ‘Sarkaari College Bachao Manch’, to protest against non-recruitment of teaching faculty in government colleges. Similar protests were held by research scholars and temporary guest staff working in colleges at other places in the state.

The protesters burnt copies of their degrees to show their resentment against pending recruitment drive of the Punjab Public Service Commission (PPSC). They raised slogans against the state government and alleged that the policies of the ruling dispensation were anti-education.

Highlighting plight of government colleges during the last 25 years in the state, Balwinder Singh, a research scholar, claimed, “The government has implemented a broader neoliberal design of privatisation, which is inherently anti-education, anti-students, anti-farmers and anti-workers.”

“It is ironic that the recruitment process in government colleges of the state has been continuously delayed for more than 25 years,” protesters said.

“As a result, more than 80 per cent posts of assistant professors are lying vacant. The standard of higher education has deteriorated due to non-recruitment for more than 1,500 vacant posts of professors in government colleges,” protesters added.

As per available information, there were only 18 regular professors of Punjabi in 38 government colleges of the state, protesters said. Due to non-recruitment in colleges, hundreds of qualified youths possessing UGC-NET, MPhil and PhD degrees remained unemployed and hopeless, protesters added.