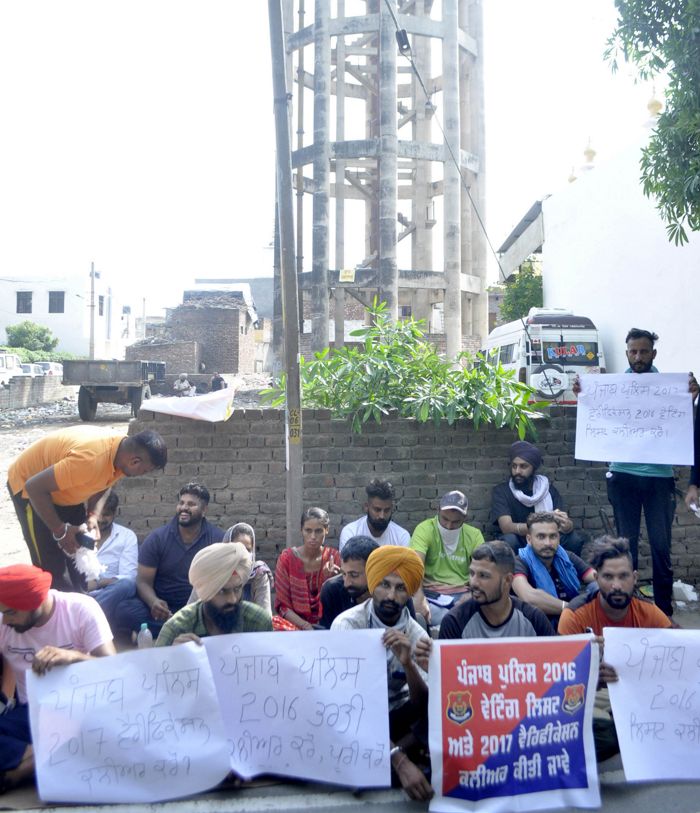 Police recruits hold a protest near a water tank in Patiala on Wednesday. Tribune photo

Applicants selected as constable in 2016, who have yet to get appointment letters, today blocked the Passi road connecting Gurdwara Dukhniwaran Sahib Gurdwara with Thapar Institute here today.

Over 40 applicants spent the intervening night of Tuesday and Wednesday on an overhead water tank to mark their protest for delay in appointment letters. These protesters also include those, who were employed, but were relieved over claims of faulty merit list.

Jagdeep Singh, one of the candidates, said they were selected in the Punjab Police in 2016 and had been awaiting appointment letters since then.

“In all, there are 1,835 candidates, who have been selected for various posts. Our medical examination has also been conducted. We have been awaiting recruitment letters till date,” he added.

The protesters said they had met many officials, including Punjab Congress committee president Navjot Singh Sidhu, DGP and ADGP, but to no avail.

Ashok Kumar, another protester, said many selected candidates were recruited, but relieved. The government claimed that a faulty merit list was prepared, he added. As such, they removed around 13 recruits a year after they were in service, he said.

They want the government to complete the recruitment process at the earliest and rehire those, who were relieved, said protesters.

“We will continue protest till our recruitment process is not completed and appointment letters are not given. We also want that any new recruitment for police posts should start only after the completion of the previous process,” protesters added.

The SP, Palwinder Singh Cheema, also reached the protesting site to listen to grievances of protesters.