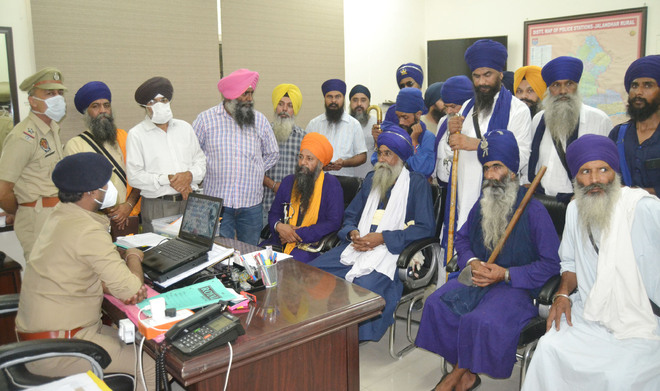 Members of the Satkar Committee in the Jalandhar SSP’s office.

Popular Punjabi singer Gurdas Maan landed in a new controversy as members of the Satkar Committee lodged a police complaint after his video went viral wherein he is heard saying that the chief of a dera and Nakodar Sain Laddi Shah is from the descendants of third Sikh master, Guru Amar Dass.

Earlier, the committee members lodged a complaint with Nakodar police and later in the evening with the SSP, Jalandhar. The committee demanded a case be lodged against the singer or else they would lodge a demonstration on the issue across Punjab. The members raised slogans against the singer outside the SSP office and threatened to even gherao the SSP office if the officials did not take action against Maan.

The singer had reportedly made the statement during an ongoing mela at Nakodar. The members of the committee alleged that the speech of Maan could be a part of his pre-planned strategy and aimed at hurting the sentiments of the Sikh. — TNS

When Gurdas Maan and Mika Singh travelled ticketless to Chandigarh