Seek special compensation of Rs 60,000 per acre from govt 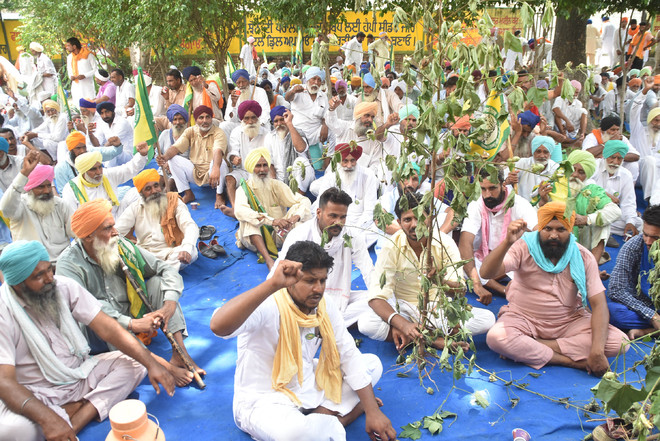 Farmers stage a dharna outside the office of the District Agriculture Officer in Bathinda. Pawan Sharma

Irked over the growing problem of pink bollworm infestation in the Malwa region, hundreds of farmers, led by BKU (Ekta Ugrahan) leader Jagdev Singh Jogewala, protested outside the office of the District Agriculture Officer here on Monday.

They also brought the destroyed cotton crop with them. Farmers claimed that 80 to 90 per cent of the cotton crop had been destroyed by the pink bollworm, but the Agriculture Department was still in deep slumber.

Jogewala said there was a widespread attack of pink bollworm in Bathinda and Mansa districts. He said it was similar to the 2015 whitefly attack, when most of the cotton crop was destroyed. He alleged that the Agriculture Department was underestimating the damage done by the pink bollworm to hide its failure.

Meanwhile, farmer leaders Kulwinder Singh Giana and Kulwant Sharma alleged that this time, the growers had been supplied fake Bt cotton seeds, which had led to the pink bollworm attack. They said this had been done by big companies and the government under an agreement reached with corporate houses. “It’s a step to grab our lands.”

Protesters said they would be forced to plough their cotton crop in coming days and demanded a high-level inquiry into the matter of Bt seeds.

Farmers further said after Bathinda and Mansa, the pest attack had started in other districts as well. They said the farmers had sprayed pesticides three to four times so far, but the pink bollworm was still present. The leaders demanded that the Punjab Government should pay a special compensation of Rs 60,000 per acre to the farmers.